Costa Rica News – Well I guess new forms of money laundering a scams are thought of each day in Costa Rica.  I would love to know how this idea came about.  My guess would be 3 to 4 ticos were sitting around thinking of how they could clean and use all the money they made selling drugs and they came up with the brilliant idea to swallow it and take it across the border.  Awesome! Happy independence day. 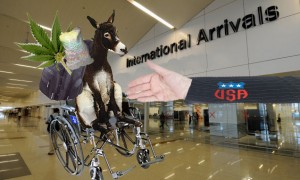 Two men who each ingested about $40,000 before trying to enter Colombia have been arrested, police have said, Sky News reported.

The pair were detained separately during the past week at the international airport in the Colombian city of Medellin and were on flights arriving from Costa Rica, according to security officials.

In the past, “mules” have used a similar method to smuggle contraband narcotics out of the country, swallowing packets of drugs worth thousands of pounds for sale in lucrative overseas markets.

But authorities said they were unfamiliar with use of the same technique to sneak cash into the country.

“This type of money laundering activity is new in Colombia,” said Wilson Patino, a regional immigration director based in Antioquia state in northwestern Colombia.

The two suspects, a Colombian and a Venezuelan, were both described as being “heavy-set” whose large stomachs apparently did not have much difficulty accommodating the wad of illicit currency.

Officials did not provide details about how the cash was recovered, but did describe how one of suspects came to be arrested.

The Colombian man drew the attention of authorities when he appeared to be nervous and agitated while going through airport security.

He was asked to pass through a scanner again and the X-ray revealed numerous unusual items in the abdominal area. These turned out to be about 40 capsules, each containing $1,000, officials said. Authorities believe drug traffickers were behind the unusual plot, although they have not ruled out the involvement of other organised crime syndicates, possibly those engaged in arms or human trafficking. daily times monitor