Costa Rica News – What would possess an avowed herbal tea lover to make a documentary about coffee?

When it’s a story about female empowerment in Costa Rica, it’s more than a movie about a cup of joe, according to Leslie Chilcott, co-producer and director of “A Small Section of the World.” The documentary, which has been making the rounds in several film festivals to much acclaim, tells the story of a group of women in a rural part of the country who decide to become coffee entrepreneurs, and in the process not only change their lives but the lives of many near and far.

After the men of the Costa Rican village of Biolley leave in search of work, the women had to figure out a way to feed their families. They take matters into their own hands and form an association to harvest and sell coffee.

“Women all over the world are involved in the coffee business and a majority are coffee farmers, but very few are in control of the financial side of the business. This story is about female economic empowerment,” said Chilcott in an interview with NBC News.

The documentary, she said, is a way to bring to light the lives of so many female coffee farmers.

“As the saying goes, a promotion for a woman is a promotion for the whole family,” said Chilcott. The sooner female economic empowerment happens for more, the better off we will all be.”

According to the International Women’s Coffee Alliance, more than 500 million people around the world are dependent on coffee for their livelihoods, and of those, 25 million are coffee farmers.

“Unfortunately, coffee farmers typically live and work in substandard conditions, which are compounded by the fact that they receive only a small percentage of the actual price for which the coffee is sold to the consumer,” the Alliance asserts. Women, who represent a good majority of coffee farmers, face additional challenges as they struggle with the gender inequality prevalent throughout the world’s coffee-growing regions, according to the Alliance.

Ana Laura Quirós Montoya, one of the women featured in the documentary, describes in the film how her alcoholic husband left her alone with seven children to feed and no means to 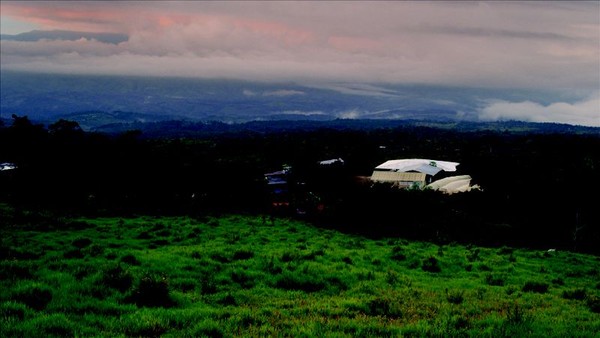 “Since there was no work here, the families were disintegrating and we had to do something. When we first got together to try to figure out what we should work on, many said sewing, but sewing was already all over the country, and we thought, well, why not coffee since we have it right here?” said Quiroz Montoya.

“The coffee farmers were discouraged because the prices were so low and we thought maybe we could get them motivated if we gave them other options so that the coffee would be better valued, and have better living conditions for our families,” Quiroz Montoya stated.

The Costa Rican women formed ASOMOBI, which stands for Asociación de Mujeres Organizadas de Biolley, or the Association of Organized Women of Biolley, a community in the mountainous region of La Amistad Biosphere Reserve, about six hours from the capital city of San José. At close to 3,000 feet in elevation, the region is ideal for growing coffee beans.

“They built their coffee mill and they are in control of the coffee,” said Chilcott. “Coffee is just a big part of our lives. It represents getting together with family and friends, and so many (involved in the process of coffee making) are women. Their influence is vast.”

Filmed in lush and vibrant cinematography, “A Small Section of the World” follows the women from the beginning, when they were surrounded by skeptics. One woman described how some of the husbands were having none of their entrepreneurial endeavors, even refusing to eat lunch left for them by the women before they went to work. It also details the trials and errors of burnt coffee and primitive machinery. The movie ends with the women in a very different place than when they started – they are considered makers of high quality coffee with their own roaster and mill, and the coffee is distributed as far away as Italy.

The women who started the association are now inspiring younger women to become involved, and one particularly heartening story is that of Samanta Ureña Arauz, a recent college grad who grew up in the village and said she felt compelled to give back.

“When I started college I enrolled in what is called Agribusiness Management. It includes the agricultural part, the administrative part. The philosophy is that the student should know all the processes in the chain of any product, and I said I want to study that,” states Ureña Arauz in the film. “I’ve learned that there is value here. It’s not just about selling coffee. It is coffee that is produced by women that help a community, that it’s more a vision. Anyone can sell coffee, but a coffee like ASOMOBI is unique.”

Ureña Arauz describes herself as rather shy – “I never even really put on makeup,” but she recently traveled to a worldwide coffee association gathering in Italy to present her university thesis on different methods to make ASOMOBI administrative and distribution processes more efficient. She so impressed the ASOMOBI women that they offered her a full-time job, and she’s now working literally in her home’s backyard.

“I just love, love coffee. I love it,” says the young college grad.

Every penny the association earns is placed back into the community in the form of a new church, a new school, fresh paint for older buildings, new jobs and income for area families.

Chilcott took one of Morissette’s lyrics “in a small section of the world” to name the film. The director, who also produced the seminal documentaries “Waiting for Superman” and “An Inconvenient Truth,” considers this film about Costa Rican female coffee growers and entrepreneurs a part of an ongoing discussion on sustainability.

“We’re so disconnected from our sources of food and beverage, and it’s good to see how many different hands it took to bring you that cup of coffee and where it came.”

“A Small Section of the World” has premiered in New York and Los Angeles, with wider distribution – including online through iTunes and Netflix among others – starting Tuesday, December 16.

Costa Rica Sportfishing 101; What are the Central Pacific Fishing Seasons?