Costa Rica News – It’s a wild old day when I meet Australian Sarah Trinler and her Swiss-American husband Scotti in a small surfing town on the south Pacific coast of Costa Rica. 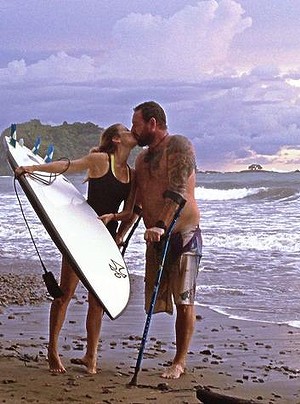 The tropical rain is thundering down, and we’re trading shouts to make ourselves heard. The town’s main, dirt road is turning into a sloshy mud bath.

Powerful things seem to happen in this part of the world – surfboards are snapped in two by unforgiving waves, rivers flood, kaleidoscope-colored sunsets put on a nightly show and crocodiles swim among stand-up paddle boarders.

But last year something completely unexpected struck at the heart of everything the Trinlers – a world-travelling, thrill-seeking couple – loved.

On December 5, on his morning motorcycle ride to their business, Costa Canyoning, Scotti was “T-boned” by a LandCruiser and thrown into a ditch, his right leg twisted into a sickening angle.

“It took my leg off right there on the spot,” says the 38-year-old, who was airlifted to a private hospital in San Jose.

“The last thing I remember was I could still wiggle my toes and then I woke up and I had lost this leg.”

After six blood transfusions, he was lucky to be alive.

The day before, Scotti had taken a prosthetic technician on one of his canyoning trips. As luck would have it, he was the first to arrive on the scene of the accident, closely followed by an ex-marine who had morphine in the car.

“The doctor said if it (help) was 10 minutes later I was done,” Scotti says.

In a state of shock, lying in the ditch, he remembers saying to one of his guides who’d arrived on the scene: “What are you doing here? We’ve got customers going on a tour.”

The past nine months have been a mighty challenge for Scotti, Sarah and their three-year old son.

Sarah, originally from Toowoomba, met Scotti about 11 years ago while holidaying with a friend in Queenstown, New Zealand.

“He was my canyoning guide. Such a cliche,” laughs Sarah, who the next day was offered a private canyoning tour by her future husband.

Having clicked immediately, Scotti flew to Moree three months later, where Sarah, then a journalism student, was living. “He came and stayed in Moree for one month, in this country, ocker Aussie area,” she says.

Deciding they were in love, the couple met again in Bangkok, backpacking for three months, before Sarah later moved to New Zealand to join Scotti. The pair chased the summers and worked between there and Switzerland, before landing in Florida.

But Scotti had long had a dream to move to Costa Rica and start a canyoning business.

In 2006 the couple moved to Central America, Sarah enrolling in an intensive Spanish course while Scotti roamed the country to find the ideal location.

Sarah, who grew up with a father in the army, was used to being on the move, and says shifting to Costa Rica felt like a natural thing to do, even though their families “weren’t necessarily stoked”.

“Maybe if we’d moved from New Zealand to Costa Rica it might have felt overwhelming, but it was a steady progression.”

However, taking canyoning to Costa Rica was a challenge. “We came here with canyoning and nobody knew what canyoning was,” says Scotti.

The pair started the business with two harnesses and two helmets, years of experience in the industry, unbridled enthusiasm and a little bit of hustle.

Their chosen location, Uvita, was also difficult. It had six continuous waterfalls – perfect for canyoning – but the highway from the capital San Jose was bad, and it wasn’t a spot renowned for adventure sports.

However, the road has since been fully sealed, and Uvita has continued to grow in popularity.

Sarah has also branched out into spending more time in her other business, Stellar Yoga, after training as a yoga teacher in the US and India. She revels in the simplicity and freedom of living in a small Costa Rican town.

“I just love how close to nature I am. In my backyard are sloths; we have howler monkeys, butterflies,” she says.

Coming to grips with the loss of his leg has been huge for Scotti, and Sarah. “My work was canyoning in the morning and I’d go surfing in the afternoon,” he says.

However, his natural positivity didn’t take long to resurface.

On day three in hospital, a friend bought a local amputee in to visit and Scotti asked: “Can he dance?”

“He busted out a salsa move and I’ve never been so happy in my life,” Scotti says.

After intense rehab, Scotti was fitted with a prosthetic leg and was walking within a month. But Scotti, who’d continued to manage the canyoning business from his hospital bed, had gone too hard too early.

Painful bone spurs followed, and an operation. He completely changed his diet, cut out alcohol and tried reiki and acupuncture to help minimise the pain.

He says support from his family, close community and friends around the world has kept him strong.

The couple’s head guide is now a business partner, and after eight years in Costa Rica, the young family has made the decision to move back to the States, at least for now.

Scotti will study to become a prosthetic technician, and plans to start a business called Stump Life Adventures, where he’ll bring US amputees to Costa Rica to go deep sea diving, rafting, canyoning, ziplining and surfing. He recently surfed on one leg for the first time.

“Giving up would be too easy, I realise there’s another purpose for me here,” Scotti says.

Sarah will teach yoga in several studios in Florida, and bring over small groups to Costa Rica for yoga retreats.

Scotti says both he and Sarah want to help others through their businesses.

“We’re here not to just exist but to live. Uplifting other people – it’s a high.”

by Larissa Ham, from http://www.smh.com.au/