Entertainment News – Hillary Clinton stopped by NBC’s “Tonight Show” on Wednesday where she was interviewed by Jimmy Fallon twice — once as Donald Trump, and once as himself. 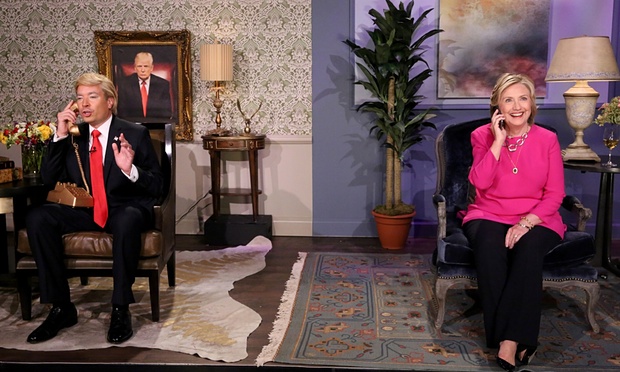 In what has become a trademark, Fallon donned the Donald’s signature hairdo and “called” Clinton at home to discuss women, immigration and Bernie Sanders.

Fake Trump opened with, “I haven’t seen you since my last wedding.” Clinton fired back, “Well, I’m sure I’ll see you at the next one.”

When Clinton asked “Trump” what his stance is on women’s issues, Fallon quipped, “I know a lot of women and they all have issues.”

The former secretary of state appeared at ease in the comedic setting, reaching for a glass of white wine mid-skit.

Clinton joked about someone she doesn’t often mention on the campaign trail. “Do you have any idea what it’s like to work so hard for something, to be so close to getting it, then someone pops out of nowhere and tries to take it all away?” she asks.

“Are you talking about Bernie Sanders? I hate to say this but I think he’s losing his hair,” fake Trump said.

Fallon’s Trump also offered some friendly advice to the Democratic frontrunner. “You sound like a robot,” he said. “If you want to win, here’s what you go to do first: yell! I yell all the time.”

The sketch ended with, what else, Clinton saying “huuuge,” a la Donald.

During the interview, Fallon asked Clinton how long she thinks Trump will last in the race. “I think that he’s gonna go as long as he wants to go and more power to him. I mean, that is one of the great things about this country,” she said, and then went on to do her best Trump impression.

It was Clinton’s first late-night talk show appearance of the 2016 election cycle. Trump appeared on “The Tonight Show” last week.