A heavy cloud cover in the Caribbean Sea that caused heavy downpours during the night in the province of Limon and extended Sunday morning to the Central Valley where it generated intermittent rain. 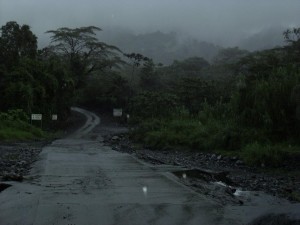 Juan Diego Naranjo, the National Meteorological Institute (IMN) explained that such activity is expected to be rainy and variable intermittent intensity throughout the day in the Caribbean, the Northern and Central Valley.

He added that the Pacific slope will have partly cloudy skies in the morning, but expect showers in the afternoon and early evening hours

The influence of this heavy cloud cover is only for today, Naranjo said.

The IMN recommended that people remain vigilant in places vulnerable to flash floods, and the increase in the flow of rivers and streams in the Caribbean.

Besides caution in areas prone to landslides in mountainous areas of the country. In the event of a thunderstorm, seek shelter if you are outdoors and avoid being around metal objects if you are indoors. Road safety due to adverse conditions such as wet and fog banks.