Have You Tried the New Board Game “Costa Rica”?

Costa Rica Entertainment – Costa Rica is the latest game from Matthew Dunstan and Brett Gilbert, designers of the Kennerspiel-nominated game Elysium. This time they’re aiming for the younger demographic with a rain forest-themed game of exploration that revolves around a push-your-luck mechanic. It’s light and simple to learn, but perhaps a little too simple and unbalanced for your grown-up game night. 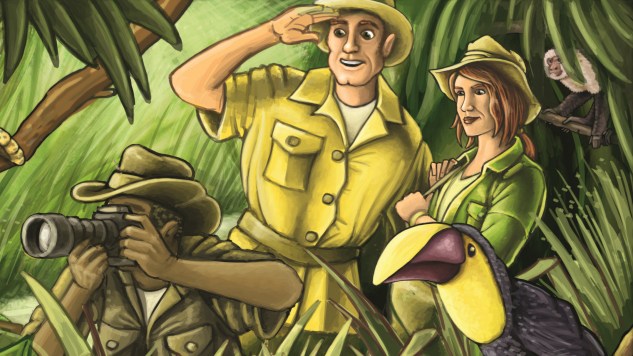 In Costa Rica, players are explorers turning over tiles in a giant hexagonal board of 61 tiles (5 per side) that includes three tile types (forest, wetlands, mountain), each of which has one of two animal types on the hidden side. Players try to collect as many tiles as possible, earning points for each complete set of six animals (one of each) and gaining points for collecting up to seven tiles in each animal type, with the points increasing for each additional tile up to seven: 1, 3, 6, 10, 15, 21, 28. (I’m sure you can guess the next number in the sequence, but there’s no additional bonus for collecting an eighth sample of an animal type.)

Each player starts the game with six meeples, one placed at each vertex of the hexagon. Players explore the board together in “expeditions,” with one player taking the lead. The leader chooses which tiles to flip over, and after each tile is revealed, players may choose to take all of the exposed tiles and end the expedition, with the leader getting first choice and each player after the leader getting the choice to take or pass, going in clockwise order. Most tiles have just one animal on their faces; some have two of the same type, and a few have two different animals. About a third of the tiles in the game have mosquito symbols on them; these “threat” tiles are meaningless until an expedition encounters two of them, which immediately ends the expedition. The two threat tiles are discarded and all other exposed tiles on the expedition go to the leader, after which control passes to the next player.

This push-your-luck mechanic means that players are always competing against the board as well as other players, trying to figure out the odds of encountering a threat tile while also determining whether it’s a good move to take the tiles and pass control to the next player. Collecting the tiles you need to grab the 20-point bonus for a complete set—meaning one tile for each of the six animals in the game—is critical, but once you choose to take tiles and end an expedition, that meeple is out of the game and can’t collect further tiles for you.

The other disincentive to end expeditions early is the main problem with Costa Rica’s gameplay: The excessive power of the player who has the last token in any expedition. That player can just run amok on the board, choosing to plow ahead until s/he hits two threat tokens, discarding those but keeping everything else s/he collected on that turn. You can play the odds a little and save mountain tiles for last, thus increasing your chances of a big haul. Every time we’ve played, the player who had the longest run as the final player on an expedition ended up winning the game. It’s just not quite balanced enough.

Players can find their meeples stranded as tiles are removed from the table, so there’s some long-term planning involved to try to maximize your return on the meeples you have on the board, making sure you don’t end up without legal moves before you’ve racked up enough points. However, one long run as the final meeple on an expedition can make sacrificing one or two other of your explorers worthwhile.

A full game takes about a half an hour including setup, and the game plays two to five, although with two players you get a lot of those “last man standing” runs I mentioned above. The more players you have the less that becomes an issue. The box suggests the game for players aged 8 and up, which seems reasonable; my ten-year-old had no trouble understanding the game and planning enough to win the second time we played. It’s a light, filler game, good for younger players who aren’t ready for something with more strategy or longer playing times, but probably not involved enough for a game of adults.

Should You Be Worried About a Crocodile Attack in Costa Rica?