Ghosts & the Supernatural – When HPI (Halo Paranormal Investigations) investigated Buena Vista Park, it was dead in the night. We arrived around midnight with flashlights, digital recorders and cameras in hand, we started exploring some of the trails. One of our female investigators got so scared, she went back into the van and stayed in the van. She started begging for us to leave. The strange thing that freaked her out is that we heard people walking and talking on the trails. As we explored the trails, we could not see any living human beings on the trails. 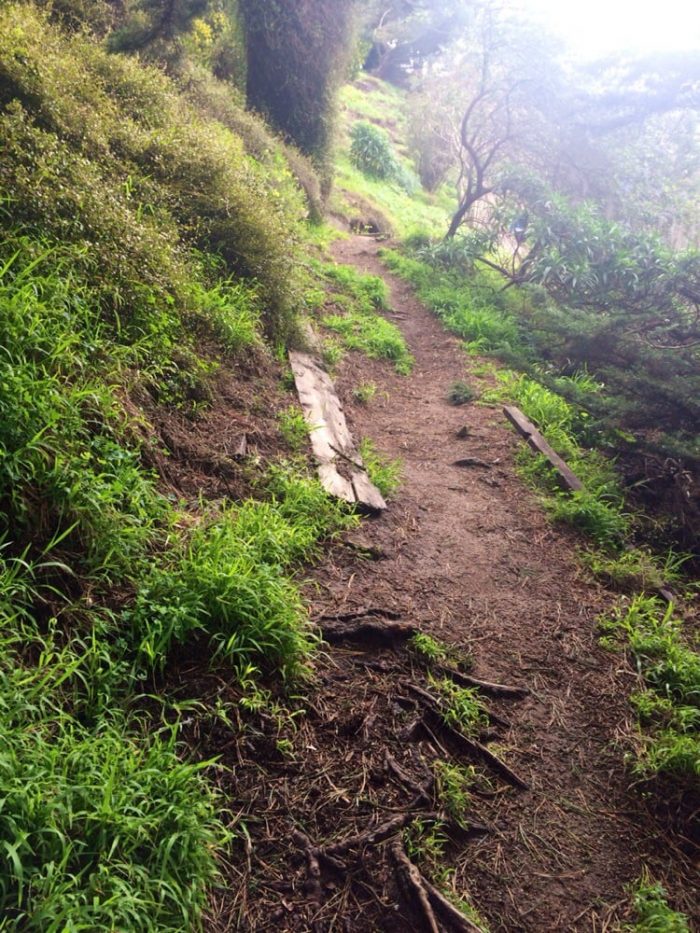 We could not figure out where the voices and footsteps were coming from. The female investigator claimed she saw a dark hooded figure in the bushes. She said the figure was watching us. The female investigator didn’t know if we were experiencing something paranormal or if we were experiencing gang members hanging out at the park. As this investigator became more freaked out, we decided to leave and headed over to Fisherman’s Wharf. The only evidence we captured was orb activity in our photos and orbs can be almost anything. No EVPs due to the wind, even though with our own ears we could hear people talking and walking on the trails.

That is our experience at Buena Vista Park.

SF ZODIAC AND THE WEST COAST MAFIA
Buena Vista Park is known as a dumping ground for dead bodies. It is rumored that the San Francisco Zodiac may have been lurking in this park. The West Coast Mafia was known to drop off some of their dead rivals and informants at this park. Mickey Cohen ran the West Coast Mafia.

Here is a story about a murder at this park:
https://sfbay.ca/2014/08/26/jury-acquits-man-of-buena-vista-park-murder/

THE DOODLER
Another serial killer that hung out at Buena Vista Park and may have dumped a few of his victims at this park is “The Doodler”. The Doodler terrorized the gay community in San Francisco from January 1974 to September 1975. Police believed The Doodler killed 14 men that he met at gay bars and restaurants. The Doodler would sketch his victims before sex and stab them to death afterwards. He was never caught.

Gutters and Retainer Walls Use Old Tombstones at Buena Vista Park.
This may actually stir up some spirit activity. You might have a few pissed off ghosts that are upset that you broke up their tombstone to use as gutter material or retainer wall material at Buena Vista Park. Yes, this actually happened and you can read about it here:
http://hoodline.com/2013/10/the-secret-tombstones-of-buena-vista-park

THE MYSTERIOUS GREEN GLOW
Sarah Greenstone and 3 girlfriends were walking through the park in the afternoon and saw an eerie green glow come through the trees. The green glow seemed to follow them up and down the trail and only when they finally were out of the park, the green glow was gone. Date of Incident: June 1998.

THE ORIGINAL NIGHT STALKER
I don’t hold much credence to this story, but on the paranormal hotline, I received a call from June Dunlap of Cleveland, Ohio. June says that she is a psychic medium and that she had a vision that in 1978, the Original Night Stalker dumped a female victim in the park. Her vision showed her a San Francisco Chronicle newspaper that had the date July 12, 1978. She could see the headline and she remembers it had something to do with former President Jimmy Carter. After seeing the newspaper on someone’s doorstep, she was next looking at a nice green Chevy Impala. The Impala parks alongside the road. She sees a sign that says Buena Vista Park. She sees a well-groomed blonde haired man pull out a woman’s body and dumps the body alongside the hillside. She sees the same man, now in another setting writing a poem and signs it the The Original Night Stalker. The paper that the poem is written on is destroyed by fire and she wakes up. June actually believes that The Original Night Stalker was at Buena Vista Park. She has no proof to her claims.

Bail Out or Stay, What To Do In Regards to Foreign Investments?