Guatemala – Fuego Volcano “maintains a constant activity” and it is causing the authorities to stay on alert for any increase, while inhabitants of several villages located in and around southern Guatemala reported ashfall from the volcano. There is information that the current rumblings are decreasing, but maintaining they are continuing,” said AFP Saturday David De Leon, a spokesman for the State Coordinator National Disaster Reduction (Conrad). 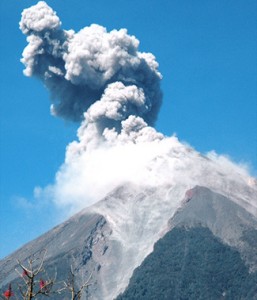 The official said the Volcanology Service reported that the columns of smoke, a product of volcanic explosions, reached up to 2,000 meters high and that the ashes could head south and south-west.

In fact, there was ash falling in towns Sangre de Cristo, San Pedro Yepocapa, Morela, Hagia Sophia, Panamiché Panamiché I and II and San Miguel Pochuta, all in the piedmont of Guatemala Chimaltenango Department (West .)

Fuego Volcano, about 3,763 meters high, is located about 60 kilometers southwest of the capital. There has been  lava flowing in stretches of about 500 meters and explosions and large amounts of steam, gases and ash.

In response, the Conrad issued a warning orange-red pre-and recommended to the Directorate General of Civil Aviation to take precautions in air traffic and avoid flying near the fire.

The colossus is located between the departments of Escuintla, Sacatepequez and Chimaltenango.

In March at least 13 explosions at Fuego Volcano generated ash columns that rose gray up to 500 meters above the crater and moved to the south and southwest, spanning about 10 miles.