Gone in 60 Seconds Costa Rica Style or Inside Job?

Costa Rica News – Randall “Memphis” Raines might have come out of retirement again in Costa Rica to steal 6 cars from a bonded warehouse or more likely the group was given the keys and told when no one would be around in case they wanted a few off road vehicles. A percentage on the sales of the stolen vehicles the price of the information. 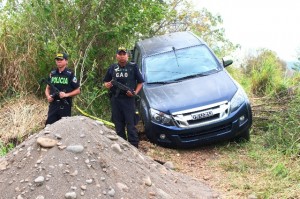 At least 10 individuals easily stole six new vehicles in the custody of a bonded warehouse in the free zone of Barranca, Puntarenas.

Both the security forces and the Judicial Investigation Organization (OIJ) reported the robbery and when they reached the site they found two of the stolen cars in a vacant lot adjacent to the zone. Guess they forgot to take their driver’s test before going through their stealth mission to steal the vehicles. Proof these were not professionals.

Randall Picado, regional chief of the Armed Forces of Puntarenas, said that since the dawn they began a search in the nearby area, but had failed to locate the other cars.

The amount of stolen vehicles is around $360,000 (Costa Rica Prices) and are Hyundai, Isuzu and Toyota, all-wheel drive vehicles. I wonder how they are going to pay the mew marchamo rates on these vehicles?

According to police information before committing the robbery the thieves had burned a portion of the vacant lot that is adjacent to the warehouse where the  new hospital is to be built.

That incident occurred between Thursday and Friday of last week. It was also found that they had made a sort of trail ofr about 300 meters to take the car to the main road.

Randall Picado said the warehouse has two security guards, who, were bound and gagged. He also said that one of them had their .38 special stolen.

Judicial authorities also struck by the ease with which thieves acted within the premises as rapidly got the keys to start the car and get them out of the room.

For vehicles that were found in the vacant lot next to the warehouse were an Isuzu D-Max and a Hyundai Tucson.

Police said that these cars were on the road for one of them deviated from the trail and fell into a ditch. The other driver was behind and had no room to pass on the way. I think stealing cars drunk is not recommended.

During an investigation carried out by the authorities in the lot located a banana style bicycle but police were not sure that has been used by criminals, perhaps she would have been stolen elsewhere. Way to go Fuerza Piblica, way to do incredible investigative work…..”We found a bike and it could be ot not be one of the criminals bikes”

What to Avoid When Vacationing or Living in Costa Rica