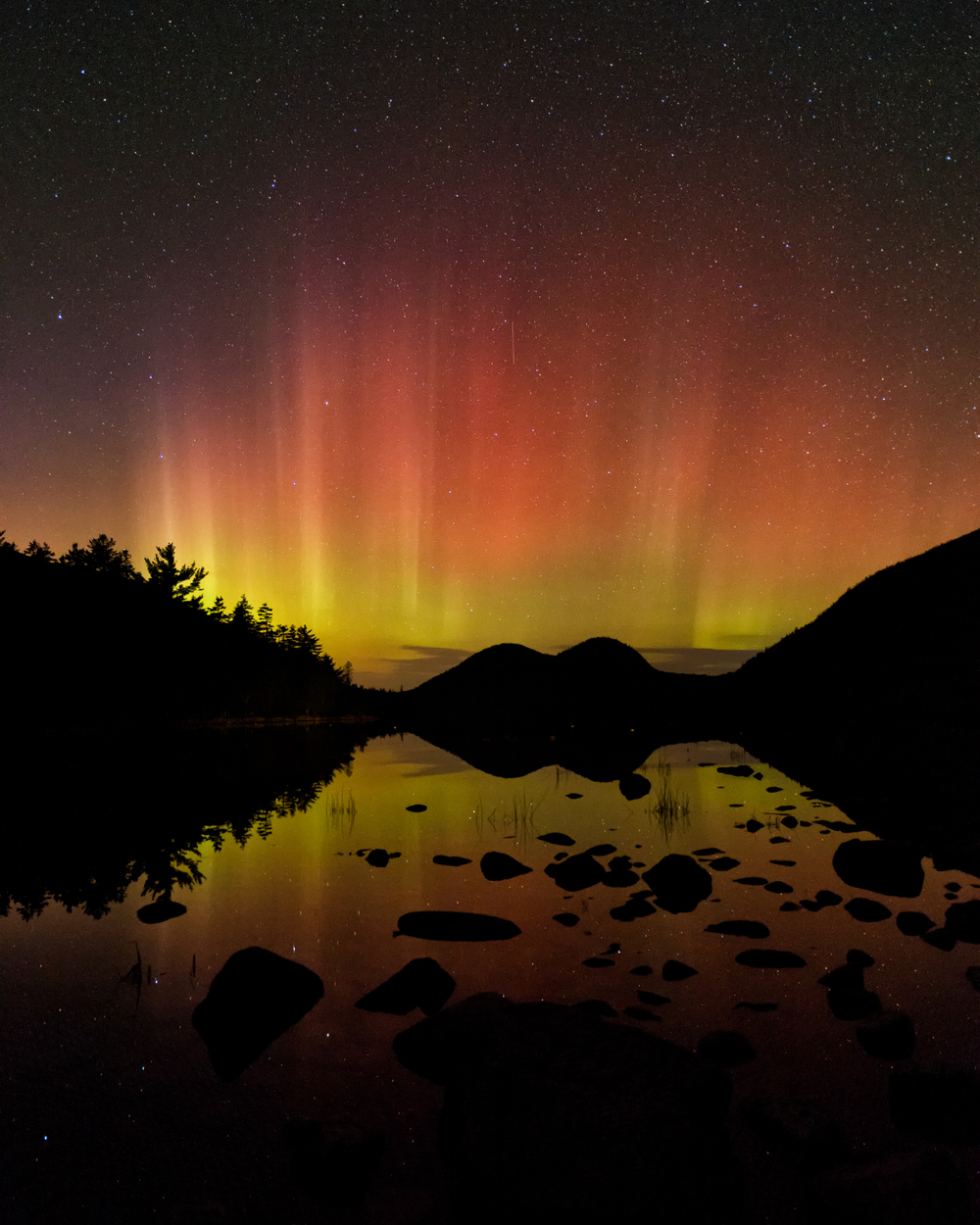 My wife Deanna Jaxine Stinson and I, have received many reports from this region. The reports come through our paranormal hotline. Some of the reports are from campers that have seen apparitions of what they believe are the Wabanaki – The People of the First Light roaming about in the forest. Other reports are of UFOs seen flying in the area and going into the water off Bar Harbor. Some reports have been of UFOs seen coming out of the water near Bar Harbor.

Acadia National Park is a national park located in the U.S. state of Maine. It reserves much of Mount Desert Island, and associated smaller islands, off the Atlantic coast. Initially created as the Sieur de Monts National Monument in 1916, the park was renamed Lafayette National Park in 1919, and was given its current name of Acadia in 1929. It is the oldest American national park east of the Mississippi River.

The area was originally inhabited by the Wabanaki people. While he was sailing down the coast of what is now Maine in the fall of 1604, Samuel de Champlain observed a large inshore island. He wrote: “That same day we also passed near an island about four or five leagues [19 to 24 km] in length, off which we were almost lost on a little rock, level with the surface of the water, which made a hole in our pinnace close to the keel. The distance from this island to the mainland on the north is not a hundred paces. It is very high and cleft in places, giving it the appearance from the sea of seven or eight mountains one alongside the other. The tops of them are bare of trees, because there is nothing there but rocks. The woods consist only of pines, firs, and birches.” He named it Mount Desert Island. Over four centuries later, the area remains essentially the same.

The Gates of Hell at Salsbury Cove
Salisbury Cove, Maine, is a quiet and lovely little village on the North side of Mount Desert Island providing a northerly view of the mainland. It is actually part of the municipality of Bar Harbor. Look for a road coming off the North side of Route 3 for easy access. This will show you a view of the ocean from the stop sign. A short drive from here to the east is the entrance to Acadia National Park in Hulls Cove. This is also part of the town of Bar Harbor. The Mount Desert Island Biological Laboratory (MDI Biological Lab), a private marine biomedical research institute, is located in Salisbury Cove. Founded in 1898 in South Harpswell, Maine, by J.S. Kingsley of Tufts University, the Lab moved to Salisbury Cove in 1921 when an organization called the Wild Gardens of Acadia made an attractive land offer. Of particular note is that this land-holding group was headed by George B. Dorr and John D. Rockefeller, Jr. who were both instrumental in the original founding of Acadia National Park.

Summer 2009: Megan Whistler who was hiking in this area came upon a location where she was hearing voices that sounded faraway saying “help me” and “get me out of here”. Some paranormal enthusiasts have referred Salsbury Cove as a Gateway to Hell. Perhaps there is a portal located in this area. There are also reports that strange genetic experiments are conducted at this location by the Mount Desert Island Biological Laboratory. A hiker (name unknown) made claim he came across a dog that looked like a German Shepherd. The dog acted scared when he saw the hiker. The hiker noticed that he had a small head growing from outside of his neck. The small head had eyes, nose and a snout. The strange dog ran away from the hiker. HIGH STRANGENESS IDENTIFIED: THE VOICES THAT NEED HELP AND THE MUTANT DOG.

Ledgelawn Inn – Bar Harbor, Maine
This Inn is very haunted. A young bride-to-be hung herself with her own veil when her fiancée decided not to marry her, because he was involved with another woman. This bride-to-be now harasses the clientele of Ledgelawn Inn. June 2002: Darren LeHorn and his wife stayed at this Inn and heard pounding on the wall at around 3am. When Darren awoke from the pounding, he looked up and saw a brunette woman that was nude. Her neck had markings from a hanging or strangulation. Darren says to the apparition: “What do you want?” At this time his wife wakes up and his wife is screaming. The apparition looks down at Darren and says: “I hate you!” Darren feels pain on the left side of his torso. He later notices that he has received 3 scratches from this apparition. GHOST IDENTIFIED: LEDGELAWN BRIDE-TO-BE.

Old Men with Long Mossy Beards Encounter
August 1994: Daniel Clayborn and a group of his friends were camping in Acadia National Park. While sitting around a campfire roasting hotdogs, they were telling stories about the days when they were single and about the girls they dated. Laughing, drinking beer and eating hotdogs, the night was fun. Daniel says it was a night reserved for the good ol’ boys. As the night progressed they heard a strange wailing sound. They heard the sound 3 times. The men at the campfire thought the sound was unusual and didn’t know what to make of it. The wailing sound sounded inhuman and was high pitched. About 20 minutes later 3 old men came out of the woods. The old men had wrinkled faces. All 3 men wore tattered blue jean jackets, blue jeans, plaid shirts. The men looked like they could be in their early 70s. Daniel noticed that the old men didn’t walk like old men, but walked in a robotic way. The 3 men stopped at the campfire and looked confused and all 3 men tilted their heads in an odd way as they looked at the fire. One of the old men says: “Is the fire real?” One of Daniel’s friends says ‘yes’. The old man that asked the question then places his hand in the fire for about a minute. Then the 3 old men simply walked away. Daniel and some of his friends noticed that their long beards seemed like moss, they did not seem like human hair. Daniel and his friends to this day, do not know what they encountered, but believe they encountered something paranormal. HIGH STRANGENESS ENCOUNTER IDENTIFIED: OLD MEN WITH LONG MOSSY BEARDS. 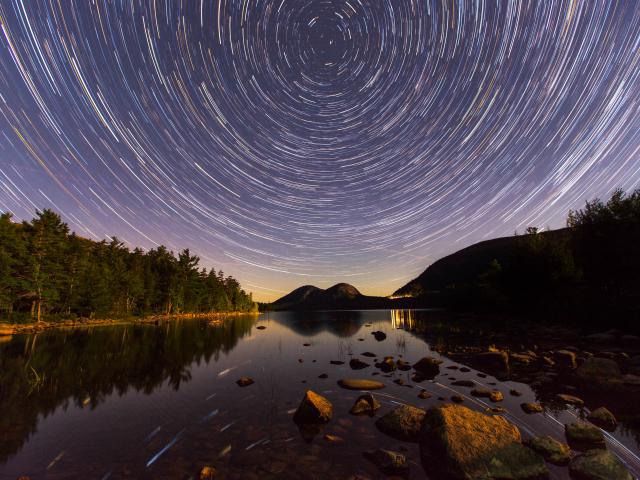 April 2005: June Lathrop hiking in the area of the MDI Biological Lab encountered 4 black cats with glowing red eyes during dusk. 3 of the black cats were of normal house cat size, while another cat, which seemed to be the leader was the size of a panther. June heard the sound of hissing. The cats seemed to only be interested in watching her. June left the area immediately, constantly looking behind her back for the black cats. June makes claim that the panther sized black cat had red glowing eyes, but later they changed to yellow glowing eyes. CRYPTIDS IDENTIFIED: BLACK CATS WITH GLOWING EYES.

Some paranormal enthusiasts wonder if the missing people at Acadia National Park are being abducted by UFOs?