Ghosts & the Supernatural – My half- brother Andy was a world traveler, adventurer, explorer, US Army decorated Vietnam veteran, Laguna Seca race car driver. After my brother completed his tour of Vietnam, he visited Guam for some R&R (Rest and Recuperation). I remember sitting in the living room and listening to my brother’s war stories, but what I found interesting was his R&R story about visiting Guam. 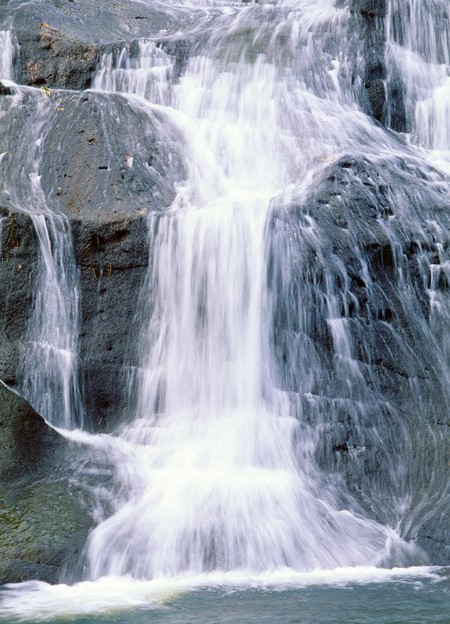 Andy told me about the beaches, the fun, the partying. One of his most memorable outings was a nice hike around beautiful Talofofo Falls. Andy says that the falls were breathtaking and his Guamanian female friend Ha’ani enjoyed watching his bright smile go ear-to-ear when looking at the gorgeous falls, it was worth the hike. Andy knows that I am interested in all things paranormal and told me that 3 ghostly boys would frequent the falls. Legend has it that the 3 boys were playing around near the top of the falls and something in the jungles scared them and they all tumbled down the falls, falling to their deaths. Late at night, when the mist of the falls float about through the bushes, people see the outline of the 3 boys in the watery mist. When the mist dissipates, the ghostly images are gone. The 3 boys died in the 1930s. GHOSTS IDENTIFIED: THE 3 BOYS OF TALOFOFO FALLS

Andy says that at Agana Heights – the Old Agana Hospital natives and tourists have seen ghostly figures moving about on the property. When people take photos at the hospital, they capture orb photos, designer orb photos and light images that look like vortexes. Some tourists even make claim that they can make out ghostly faces in their photos and if they take a picture of a designer orb (an orb with intricate designs inside, sometime with a nucleus) they can make out a face when enhancing and enlarging the photo. At times music can be heard from the hospital. Andy says that he thought he heard music coming from the hospital and then the music simply faded away. Andy recognized the music as the Guam official hymn. GHOSTS IDENTIFIED: THE SPIRITS OF THE OLD AGANA HOSPITAL.

At Agat – Old Spanish Bridge there is a ghost. The bridge was built in the 1700s. Legend has it that the daughter of a Spanish officer during the days that Guam was occupied by the Spanish was dating a Guamanian indigenous native. The girl’s father saw the native as a lower class citizen and did not approve his daughter dating the native. The officer’s daughter and the native boy would frequently meet on the bridge for a romantic interlude. At some point they discussed marriage and the love that they had for each other. When word got back to the girl’s father, he had the native boy savagely murdered. When the officer’s daughter learned about the murder, she drowned herself by jumping off the bridge. To this present day, people see a woman in white walking in and around the bridge crying. GHOST IDENTIFIED: WHITE LADY OF THE OLD SPANISH BRIDGE

Ha’ani told Andy that she once witnessed the Gun Beach Spanish Horseman. On one evening, Ha’ani and her friends were sitting around a campfire at Gun Beach and saw a Spanish soldier on a black horse holding a torch light trotting on the beach. As they watched this soldier on horseback, he simply faded away, along with his horse, the only thing you could see was the flame from the torch light floating in the air like an orb and then zipping straight upward into the night sky. It’s something that Ha’ani will never forget. GHOST IDENTIFIED: GUN BEACH SPANISH HORSEMAN

I received an email from Guy Lambert who went on vacation to Guam and he tells me that he was visiting the Leo Palace Hotel and in the hallway he saw 2 soldiers and one of the soldiers had no head and seemed to be holding his helmet. The soldiers walked into a wall and vanished. GHOSTS IDENTIFIED: THE PHANTOM SOLDIERS OF LEO PALACE HOTEL

Other haunted locations are the Big Navy Facility where people hear the LAUGHING CHILDREN OF THE BIG NAVY FACILITY. Yes, they hear ghostly children laughing and one person was so freaked out because the ghostly child started laughing hysterically. Ha’ani says that the Nikko Hotel is built over a Chamorro burial ground and when the sun goes down you can hear ghostly wailing. GHOSTS IDENTIFIED: THE WAILING SPIRITS OF NIKKO HOTEL.

Ha’ani says that there is also a MONSTER CENTIPEDE that lives on Guam, maybe there is more than one. Some boys were playing a game of baseball and out from the jungle crawled out a huge centipede. The boys immediately stopped playing baseball and ran home as fast as they could.

Costa Rica to Belize to Mexico….The Answer to the Cuban Immigration Problem?

Are You Ready for Your Netflix Binge on Original Series?