Ghost Hunting; A Haunting in Vallejo

Ghosts & the Supernatural – The date is February 6, 2010, Saturday and I have my investigative team heading over to Vallejo. 37 Balboa Avenue to be exact. HPI Researcher Laurie Rutledge of England discovered some interesting facts about this residence. The notorious Good Servant Orphanage has a connection to this property. 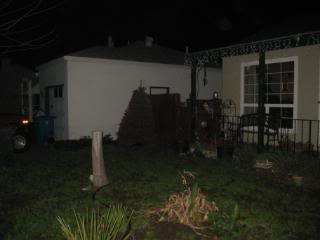 It is said that the orphans were used to work this land. The orphans went through all kinds of torture from lobotomies, to electrical shocks to the brain to whippings. It is kind of odd, that one of the apparitions seen by Carolann Castro (occupant) is a small girl with brunette hair that zips here and there in her home. Could it be that some of the orphans from this notorious orphanage haunt this property? Another factor that Laurie discovered is that the Suisun Indians roamed this land and collected mystical rocks. Unusual rocks are found on this property. One rock that was discovered is a rock with a star shape. Another rock was the Heart of Stone rock. An actual rock that looks like a human heart and was featured on Coast to Coast AM.

Carolann Castro gave my team a briefing of the activity in her home and in Carolann’s own words is her briefing below. Carol take it away:

“My husband Greg and I and our ten week old puppy moved into our home Halloween weekend of 1999. Two weeks later we were in our bedroom watching the news when our puppy jumped up and darted to the front door barking in a mean way, while the front door opened we heard two people, it sounded like a man and a lady talking back to each other and we heard their footsteps. No one was in the house but us. We have seen many shadow people on my front porch.. My husband would get up at 4AM to go to work and would lie on the couch in our great room, he felt the temperature drop and felt someone standing over him. One time I was followed home by a little boy entity from the Carquinez cemetery. Foot steps have been heard going up my stairs to the attic also footsteps walking around. Temperature dropped one night early around 6PM or so I asked for them to show themselves, my bedroom door slammed shut shaking my walls in the hall way. Our roommate saw a tall long haired blonde who was coming out of my bedroom, walking down the hall toward the bathroom, when he called out his girlfriend’s name, which was out in the garage room. His girlfriend was in the recording studio and felt a hand on her shoulder.

My husband and I, at different times saw what could have been a child shorter than five feet tall, with short brown hair, running in the back hallway to the sliding glass door leading to the back yard.

My dog, Dozer will alert me when something is amiss in my home. He will grab a shoe or a sock and go running with it. When I grab my camera I get orbs playing with him.
I have also had knocking at my front door when there is no one there. The temperature drops a lot in my home where there is no windows open”.

FIRST INVESTIGATIVE SESSION, EVIDENCE PRESENTED:
After the first session of our investigation, we had a briefing to see what evidence we acquired. Here is what we found on the first investigation:

Christian Scott’s Own Words:
“Using a Quantum Vox Converter found fluctuations that put out the following words: field, Paul, policeman, Mary, mirror and point. Several different signals in and around the house. Specifically the field behind the house had several anomalies passing through, seen with radar and sonar.” Note: Christian’s Quantum Vox Converter said my name twice and stated I was once a policeman, when in fact I was a military policeman at one time.

Deborah Baughman received an EVP of a man saying “kill” after she was talking about the mystic rocks that were found in the backyard.

END OF EVIDENCE, FIRST SESSION.
As we continue on our 2nd investigative session, my teams Team Colts and Team Saints move into areas of the home that they have not investigated yet, including the outside perimeters. 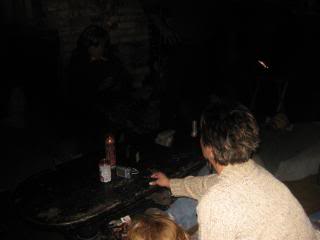 SECOND INVESTIGATIVE SESSION, EVIDENCE PRESENTED:
Kathy and Chantal were in the bedroom and they asked the angels on a hanging string to move. They asked the 1st angel on the string to move and it moves. Then they asked the 2nd angel on a string to move and it moved. There was no breeze. This experiment may have shown intelligence. The EMF Reader spiked during the angel movement. Deborah took 3 pictures in sequence and all 3 photos show a moving orb flying out the door. EVP is captured, man’s voice saying “hello there”. Huge knocking sound is heard from underneath bed and the bird in the cage starts acting crazy. Knocks are heard on bedroom wall. Thermal camera fogs up for no apparent reason and this happens in one of the active bedrooms.

SEANCE CONDUCTED, EVIDENCE GATHERED:
Cold spots, temperature changes are felt. Photographic anomalies, strange shadows and designer orbs. Pictures were taken when K2 meter would spike and the shadows and orbs would appear. Verbal verifications on K2 meter. Intelligent responses to questions on the Ghost Radar. EVP captured and it sounded like possible Indian chanting. On the Quantum Box Converter we received words that coincide to this property and those words were: tree, corn, Paul, sharp, William, knife, bow, surprise, farmer and hurt. It is suspected that corn was grown on this property. Knife and bow would coincide to the Suisun Indians.

CONCLUSION:
Most of the evidence was circumstantial. The EVPs are unexplained. 9 EVPs were captured this night. I do believe there is paranormal activity at this home. While my rough draft was LIVE on Facebook, the rough draft of this story instantly received 65 hits and a Texas paranormal group called me after reading the rough draft and their psychic kept feeling that the San Francisco Zodiac is somehow connected to this property. We found no evidence that the Zodiac is connected to this property, but an interesting note is that the occupant Carolann Castro and her husband actually were extras in the Zodiac movie.