The founder of an international environmental group known for his confrontations with fishermen and whalers ship was arrested in Germany and extradited to San Jose, Costa Rica, where he is wanted for allegedly threatening a fishing boat in 2002, German authorities reported today. 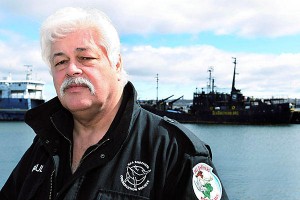 Paul Watson of the Sea Shepherd Conservation Society, was arrested yesterday at the Frankfurt airport because of an international arrest warrant issued by Costa Rica, said the local prosecutor’s office spokesman.

“He is accused of using a ship to intimidate another boat and put his crew at risk in 2002,” said the spokesman Guenter Wittig.

Watson is currently in custody and a judge will decide later if it stops formally pending extradition, said Wittig.

Sea Shepherd said that Watson was filming a documentary at the time of the alleged incident happened. It happened in Guatemalan waters, when the American Association reported the discovery of an illegal operation to hunt sharks Finnish aboard a boat in Costa Rica, the Varadero.

Sea Shepherd said in a statement that he asked the crew to stop Varadero and headed to the port for prosecution by the authorities. The Sea Shepherd crew accused of trying to kill them.