Ghosts & the Supernatural – Contact Person: Myrna Arens – Activity: 4 year old child became possessed and started choking Myrna – everything moved in slow motion. At times Myrna feels possessed and says weird things. Some people that have been to the house, have been scratched. Indian drumming is heard at times coming from the fields. 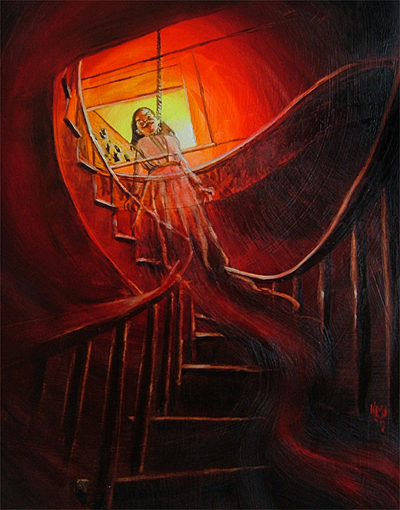 The occupants tell me that in January 2015, they started hearing people partying, but there were no people around. I believe this to be a residual haunting activity. Myrna’s grandson became possessed for a few minutes and jumped on Myrna and started choking her. Myrna in desperation, called a psychic friend that was able to conduct a release for her grandson, detaching the entity from the grandson. Last Wednesday, the occupants heard chattering noises, then at 4am, they heard scratching, banging sounds and thought maybe it was the cats, but it wasn’t. One of the walls started bending and expanding and Rod picked up on this immediately and said that behind that wall is a picture of Satan. The occupants have heard sounds of a big crash and when they investigated, there was nothing that was disturbed. They caught this banging sound on their recorder. Occupants have seen the shower curtain open on its own. Sometimes the drawers of this tiny cabinet will open by itself says Myrna.

The first thing that Deanna picked up on was that she felt something was buried in the orchard. Well, this makes sense, because serial killer Juan Corona who killed 39 migrant farm workers buried many of his victims in the orchards. Deanna knew nothing of Juan Corona aka the Machete Killer.

Rod is a Clairalience sensitive and he smelled something of a dire nature and brought it to the attention of the occupant. The occupant confirmed what Rod picked up on as being correct.

Other activity: Kerry hears voices, sometimes she feels like she is being watched. A shadow blob was seen by the palm tree. Cats got scared when banging sounds reverberated through the house. One occupant felt a finger run across her shoulder. The occupant has a cigarette rolling machine and the sound of this machine was heard, but the rolling machine was not on. One occupant captured an EVP that said “your dead”. A occupant took a photo of herself and behind her, she had the face of a little girl and the face of a baby that appeared behind her selfie.

Kerry had bruises and scratches that were caused by the entity. Cheyenne during the investigation was severely scratched on her back. While investigating Myrna’s home, Kris Hansen captured a “yes” EVP when she asked the entity if he once told Lindsey that she needed to lose weight. Also her Ovilus said “gone” when I asked what happened to the former occupant that had Satan tattooed on his back. The Ovilus says “gone”, yes, it is rumored that he is now in prison for running over a person. While in Myrna’s Rear House, we captured 2 Class A EVPs, one said “Merl” and the other said “no”. Myrna’s room – the air was thick, so thick you could cut it with a knife. Myrna said that once she witnessed a black shadow run towards her house and then stop. The toy cabinet – the doors open sometimes.

At the Front House – Lindsey Rose home, we captured 3 EVPs: a) a muffling voice (can’t make out the words); b) When I asked Al, who is deceased if he is haunting Lindsey, he says YES – clear Class A EVP. c) We capture a growllllllllllllll EVP and I was told that Al would growl playfully if he disagreed with you or didn’t like something. He probably didn’t like the fact that I got Lindsey’s name wrong.
Rod saw some moving orbs with his own eyes and I captured some orbs in my pictures. Note: Unless we 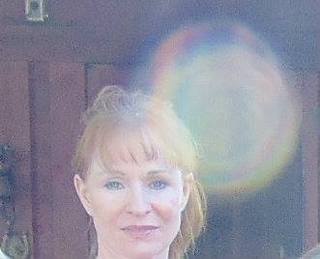 can show orb intelligent movement, then these will only be classified as orbs.

I captured an EVP and you can distinctly hear gunshot sounds in the background. There was no one out in the orchard with a gun. The gun shot sounds was probably the residual sounds of hunters.

LAURIE MZTAKEN RESEARCHER SAYS:
Anyway whatever is attacking her is very nasty. Spirit said her mom had a xxxxxconfidentialxxxxxxxxxx and this nasty thing knows it. Everyone thought she was crazy, and now your client is worried others will label her as well, she is not crazy. I do not think the spirit drumming is connected. Could feel some things just from looking at Google satellite.

DIMENSIONAL WINDOW:
(In Deanna’s Own Words): I (Deanna) am glimpsing at all the rooms in the house and as I come across the last part of the house, I wondered why Paul and Rod weren’t following me into the next room. I see a room that looked like a living room. There is two modernized looking low pastel grey colored couches on opposite sides of each other. The floor is a soft pastel blue carpet. There is some sort of glass-like coffee table in the middle that had prisms inside of it. I kept walking as I am looking and I walked into a door with a mirror on it. I hadn’t seen a door there at all. The room was gone. The room I am in has no couches, it is a bedroom with no couches or table. I looked back into the mirror, opened the darkly stained wooden door and looked outside into the beautifully green mown-lawn. It’s a vision.

THE CLEANSING:
Deanna conducted a Palo Santos house cleansing and I conducted a Roman Catholic house blessing. As mentioned above, I also conducted some Baptist baptisms in the swimming pool. After the baptisms, most of the occupants felt relieved or felt better. Cheyenne didn’t feel too well after the baptism, in fact she was the one that was scratched on her back while we were conducting the house blessings. I prayed over Cheyenne and hopefully she will overcome the force that was making her feel bad.

How the Media Is Fueling Donald Trump’s 2016 Presidential Campaign