Sochi, Winter Olympics – Canada’s most famous hosers, Bob and Doug McKenzie would have the time of their lives in Sochi. Oh, Canada knows how to make the good times roll at the Winter Olympics with a little taste, or a sip, of home. 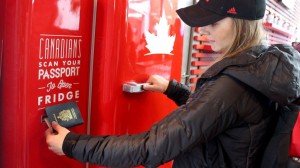 But here’s the catch, you need a Canadian passport to open it.

The fridge has a electronic passport reader, not unlike the ones at airports, that is equipped to recognize the Canadian government seal, the font and the word “Canada” on the passport.

Once you prove that you (or someone with you) is Canadian, the door springs open and, voila, free Molson.

Molson, which is based in Montreal, merged with Denver-based Coors in 2005.

The standard, retro-style beer fridge has become something of a Molson icon in Canada, according to Aaron Starkman, a partner and creative director at the ad agency ReThink in Toronto.

Starkman’s team originally came up with the idea for the Molson beer fridge for a Canada Day television spot last year as part of a Molson marketing campaign. Starkman said “it was always part of the plan to send the fridge to Sochi.”

“The notion was… and I think this is true with Americans as well for us, that the further you are away from the home the more Canadian you feel,” Starkman said. “We wanted to just have an icon to remind people of Canada and to have a taste of home when they are so far away.”

ReThink’s 90-second YouTube video and a 30-second TV spot followed the Molson Canadian beer fridge as it appeared in unexpected places across Europe, including England, France and Belgium.

“We waited for Canadians to show up and we filmed the hilarity that ensued,” Starkman said.

The TV commercial became the second-most watched TV ad in Canada, according to Starkman. After its European tour, the fridge made its way to the United States for the National Hockey League’s Winter Classic in January before heading to Sochi.