Trending Now
Costa Rican Journalist Awarded Pulitzer Prize
Virgin of the Angels to Protect Costa Rica?
Will Costa Ricans Be Evacuated from Wuhan?
Is Costa Rica’s Irazú Volcano Dangerous?
Cool Winds Expected in Costa Rica For Next...
Teddy Bear Heart
This Font Helps You Remember What You Read
Costa Rican Gives Her Advice About Touring France
New Species of Orchid Named for Costa Rican...
Guy Named Bud Weisser Arrested for Trespassing at...
Home Costa Rica News Former Director of Conavi: “I Have Nothing to be Ashamed Of”
Costa Rica NewsUncategorized

Former Director of Conavi: “I Have Nothing to be Ashamed Of”

Another government official still unwilling to admit he was wrong and that he could had any control over the situation.  His kids are probably at private schools with new cars and an he most likely just did an add on to his house with the money scammed from the border trail, but he is like mot ticos will never take responsibility for his actions or lack of. 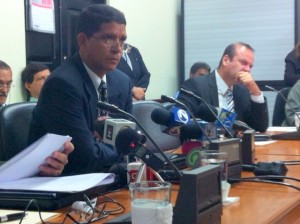 The former director of Conavi, Carlos Acosta, told Congress today that it has nothing to be ashamed of or regret, in decisions made about the construction of the trail border.

During his appearance before the congressional committee investigating the work done on the border with Nicaragua, also rejected the accusations against him.

Acosta described as unfair the accusations being made against him for alleged irregularities during the construction of 160 km route between the Middle Delta Cheese and Costa Rica.

He claimed that during his tenure was not aware that they were committing misconduct in construction.

He said he was Manuel Serrano, another Conavi official, who was responsible for hiring the engineering firms to build the trail, but was physically “impossible” that he (Acosta) could control the quality of works and the amounts were paid by them.

Acosta was removed as director of Conavi when the Ministry of Public Works and Transport made apparent allegations of mismanagement of funds in the construction of the road.

Papa John’s Pizza To Raise Prices Because Of Obamacare

You cannot shame any Government Tico official here. Carlos Acosta he is as dirty underhanded as anyone who get the piggy bank. However, he talking to congress and they too have deals scamming money. Your right Dan his children do go to private schools. Oh! he will not be punished, will not have to pay back and will keep his pension some how. Business as usual here in Costa Rica.

I want that job…money and pensions with no stress or accountability. where do I sign up…