First Look at Mount Everest Base Camp After Avalanche (Video)

World News – Flying over Mount Everest base camp, a wide track of snow covers where tents once stood. 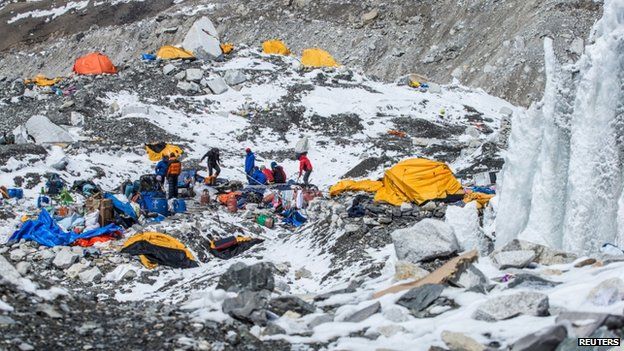 The white path offers chilling evidence of the mountain of powder which ripped down the world’s highest peak and left at least 18 climbers dead in its wake.

NBC News flew over the devastation in a rescue helicopter on Wednesday and visited base camp. Officials told NBC News they believe there are no more climbers trapped higher up the peak. But four days after the avalanche, base camp was still reeling from the tragedy that befell it.

Dan Mazur, an American expedition leader, said one man with his trekking company Summit Climb had died in base camp after refusing to accompany the team up the mountain in the hours before the quake hit.

“We tried to convince him to come with us, we worked really hard,” Mazur, originally from Washington state, told NBC News. “He had spoken to his wife and she did not want him to go, so we continued up the ice fall.”

Mazur said that when the rest of the team reached Everest’s Camp 1 at around noon local time, they felt a “huge tremor” in the glacier.

“We did not know what it was, everything started shaking and the mountain was falling down around us,” he said. The group only learned about the avalanche base camp radioed to say the camp had been “wiped out.”

“They could not find our friend,” Mazur added. “Around an hour later they found his body.”

Thomas Taplin — a documentary filmmaker from Colorado — had been “blown out of his tent” by the avalanche, Mazur told NBC News.

“The hardest thing was having to call his wife,” he added.