Figueres’ Plan is an Invitation to Give Ideas

Jose Maria Figueres has a plan but he has no idea how to get there and is asking others for ideas.  Let’s hope he is not asking the corrupt government politicians for ideas as they just want to pad their own pockets with cash.  The “country project” introduced yesterday by former President Jose Maria Figueres Olsen (1994-1998) proved to be an invitation for anyone to make proposals for change. 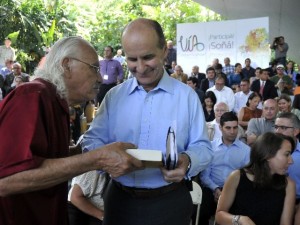 After a presentation of one hour and 20 minutes, dominated by Figueres moving in the middle of the stage with ease, not surfaced any particular approach.

There was no document to enumerate a specific action to give direction to the country or to address some of its main problems.

What the exmandatario and his team of nearly 50 people had been an initiative for the public to propose “creative solutions and innovative ideas to transform reality.”

The announcement of the project, called “Via Costa Rica”was held in the auditorium of INBioparque in Santo Domingo de Heredia, to more than 200 people.

The activity ended with the presentation of the project website (via.cr) and the projection of a short ad with the voice of Figueres (although exmandatario denied planning to advertise on television).

Asked by reporters about the absence of proposals, Figueres paid, over and over again, explanations: “What we’ve launched is the beginning of a process, a participatory process (…). The challenges in the country are sufficiently broad in all sectors for a few pretendieran arrogate the power of what are the solutions (…). Of what it is to build consensus (…). As I do not believe is that all the solutions we have to come from above. ”

He added that present something equal to a government plan would have been “disrespectful and daring.”

Jorge Oller, a member of project advisory group, said: “There is a sort of general expectation of waiting for Moses come down from the mountain with the tablets. Maybe if the communication is created that expectation, no doubt was, then, a mismanaged expectations. ”

What will happen to the project, if Figueres is not running for president? The exmandatario argued that this is a “civic movement” of different political, and that some solutions might not need the government. Some said as an example, can be implemented in municipalities.

He also mentioned that the project has no deadline. Cuts will be made every three or four months.

According to Alvaro Ramirez, coordinator of the plan, public input will be accommodated in five areas: education, community, economy, health and democracy.

Figueres said the starting point is the report State of the Union , annual diagnosis made with the support of the National Council of Rectors (CONARE) and the Ombudsman.

According to his words, after 25 formal meetings and many informal concluded that the country lost its way and divided.

During the presentation of the project, Figueres said that the country could quickly seize opportunities as the high prices of grains caused by demand in India and China, and that the problems of the CCSS have to do with the increase in the number of insured direct the attention of most costly diseases and longevity.

AyA’s Water Rates up 25% on Average

[…] on which, together with a group of experts, aims to design a new “country plan” which he …Figueres' Plan is an Invitation to Give IdeasThe Costa Rican […]