World News – We will see if the USA is all talk or if they will stand by their words of wanting to fight climate change.  My guess would be the lobbyist money will make sure that the USA does not get involved in this. 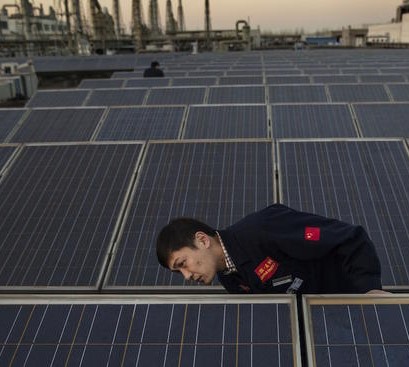 China has unveiled a proposal for a $50 trillion global electricity network that would help fight pollution and the effects of climate change.

The plan envisions linking existing and future solar farms, wind turbines and electricity plants in Asia, Europe, Africa and the Americas, according to the head of State Grid Corporation of China.

The proposal is in its initial stages and would require huge investment from around the world. If it goes ahead, it would be the world’s largest infrastructure project. It could be operational by 2050, according to backers.

“Global energy interconnection” was the answer to these threats, Liu said.

The State Grid Corporation of China envisions a future “global village” of efficient transmission lines to tap and distribute electricity from giant solar farms around the equator and wind stations in the Arctic, according to its website. Liu estimated that the global network could mean clean energy comprising 80 percent of global consumption, displacing fossil fuels as Earth’s principal energy source.

China’s government invests more than any other country in wind and solar energy.

Energy transmission technology “has matured and clean energy is becoming more economical, so the conditions for building global power interconnection already exist,” Liu said in a statement on the company’s website.

Related: Gates, Zuckerberg and Other Tech Titans Team Up to Push Clean Energy

“It’s a brilliant plan,” he said. “It might encounter difficulties during construction but it’s possible.”

Xue added: “Reducing carbon emissions is a global issue and as a great power, China is taking on more responsibility. This plan is good news for the world.”

— Julia Zhou contributed to this report.