Costa Rica has this month to amend the laws that are in place in regards to the maritime terrestrial laws that grant concession rights to people living on the Costa Rican coasts. However, one must read between the lines and see why after over 30 years of a law being put into effect, the Costa Rican government has now decided to enforce this law and take these concessions back.  Through some research CRT has made some assumptions of, “Why Now?”. 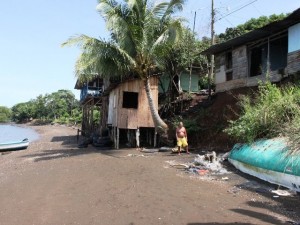 The danger of eviction is scattered along  the 1,412 kilometers of coastline that Costa Rica has.

Tens of thousands of Costa Ricans could be displaced from their homes or businesses because they violate the law of maritime-terrestrial zone (ZMT), according to reports by the Comptroller General of the Republic.

Some do not even know the risk of losing the houses they have lived for decades.

The ZMT provides 50 meters inalienable public from the low tide line and the next 150 meters of a restricted nature.

It is estimated that only 6% of the national ZMT is privately owned (people who managed to register property before 1977 when the law took effect dela sea-land area), less than 20% are protected natural area and the rest is distributed uncertain rates of concessions, informal possessions, as Piva. “What we have is a mess,” he summarized.

What the government should be revealing is the fact that although this law was put into effect in 1977 and they are now looking to build their own infrastructure projects and just take the land back.  They are supposed to compensate those living on the concessions a certain amount for any improvements that they made on the property. The Costa Rican Times sees a long short term scam by the Costa Rican government to get more cash in their pockets for infrastructure projects.  They all saw how much they could make from the border trail, this gives them even more access to spread out more scams around Costa Rica.

They also do not seem to  be following the regulations that even they put into place which are the following:

Concessions on maritime zone beach property can be forfeited for the
following reasons:
* Failure to apply for an extension of a concession in a timely manner
* The forfeiture of rights by the interested parties
* The death or legal absence of the concession holder with no heir
* Not abiding by the established obligations of Article 51
* Cancellation of the concession (ZM Art. 52)

The ICT can cancel a concession on maritime zone beach property for:
* Non payment of the yearly canon or royalty
* Breach of contract (e.g. use of the land for purposes other than those
expressly stated by ICT)
* Violation of the ordinances of the law that grants the concession
* Impediment of the use of the public right of way
* Other causes that this law establishes (ZM Art. 53)

Which of these happened in orer for them to reclaim the concessions now?

The intent of the moratorium was announced in April for a period of one year, but on July 25th President Laura Chinchilla announced twice as long. “We will not allow the imposition of the criteria dictated by technocrats in desks away from the people who inhabit this country,” he said in his speech.

Rob them blind of their land they have had for generation. I guess someone and a group want to manipulate the laws then take the land and. Oh! now THEY can build there after they appeal the laws. Why now ??? Money right?? under the pretext of maritime laws, green laws and sanitation concerns and free beaches for all.