Costa Rica News – Well the earthquake this morning in Costa Rica has not reported any deaths as of yet, but it did require a lot of people to move in and out of the hospital in Puntarenas.  Due to damage in the hospital an emergency evacuation was ordered to inspect the building. 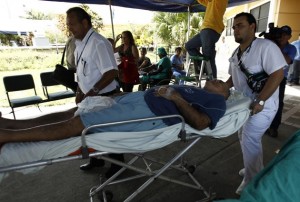 Monsignor Sanabria Hospital, Puntarenas was damaged after the earthquake, which forced the total evacuation.

“After today’s earthquake, some hospitals like Puntarenas were damaged and therefore the authorities are concentrated in Cedeso as national command center to analyze the situation and define the actions,” the Social Security Fund in your account Facebook.

At 11:30 am the Fund issued a second report which reported that the hospital “was completely evacuated and patients are being moved, who by their health condition so require, to hospitals in the network of services, including hospital Mexico, San Ramon, nearby clinics, among others.Patients are being classified at this time for shipment and will be shipped by air ambulance and if required “.

He added that the clinics in Orotina, Chacarita, Barranca, Paquera, “was reported as normal and are supporting the work. Hospitals also are operating in Liberia and Nicoya partially Hospital. In this medical center was suspended for outpatient and emergency damage walls is laboring normally reinforced with medical staff in the health area of Nicoya.Chacharita clinics, Orotina, Barranca and Cóbano “.

“The CCSS is sending a team of structural engineers to Puntarenas and another to the south of the country in order to assess the Puntarenas Hospital and other units in the area,” says the report of the entity. At the end of the later assessment would have a serious problem.

According to reports the correspondent in the area, which suffered structural damage the building Monsignor Sanabria ranging from the third to the seventh floor.

Evacuees are on the side of road and the most serious in a rehabilitation center in front of the hospital and was not damaged.

At about 10 am the Fire Department began an inspection to determine damages to the building.

For now, they are visible cracks in walls, a portion of the wall collapsed on the fifth floor and damage to windows and stairs.