Well it seems that people will find just about anything to try to get messed up these days.  Teens are now seeing local computer stores as their pharmacist  before a night of partying. 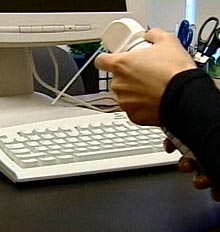 A common everyday computer-cleaning product has become the newest deadly object of abuse for teens.

CBS  reported on “dusting,” the latest and potentially fatal high for eighth graders that is through inhaling computer dust cleaner that comes in a spray can. The trend has led to some deadly consequences.

One woman, Carly Rousso, 18, was dusting when she allegedly killed another person on a sidewalk with her car this past Labor Day. And a computer dust cleaner was found in Thomas Murphy’s car that killed a woman in September; Murphy pleaded guilty in that incident.

A report by the National Institutes of Health from 2011 said dusting’s biggest abusers were 8th graders. “Buy a can, buy a case and get high,” Dr. Michael Wahl, medical director of the Illinois Poison Center, told WBBR about young peoples’ thought process behind dusting.

“They affect your heart in such a way so that is it more likely to beat irregularly.” Symptoms that a young person is dusting, according to experts, include acting belligerent and dramatic loss of weight.

“He got really thin. I mean, really thin,” said Shawnda Hunt of her 18-year-old son Aaron, who died in 2010 from inhaling propane. She discovered empty cans after her son’s death. “It’s just pointless and dumb,” said Aaron’s brother Jonathan.