The lack of monitoring makes it easier for boats entering at high tide in the mangrove of King Beach, Manuel Antonio National Park, in Aguirre, Puntarenas, to hide drugs, or boats for refueling.  The actions are presented in a section of 11 kilometers of beach between the mouth of the Naranjo River and other rivers that form Savegre and Portalón. 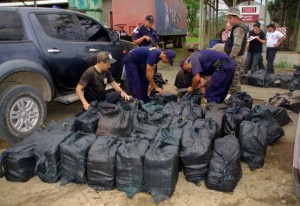 Carlos Martinez, head of the security forces of Ahmed, said in a beach tour by King, on Wednesday, July 4, detected seven sites have docked boats.

He said also found plastic Jugs, blanketed remains of a cement and a tube embedded in the sand to save water. For Martinez, that site was a camp of drug trafficking.

Carlos Vinicio Valverde Cordero, director of the Conservation Area Minaet Central Pacific, said they are aware of the insecurity in this area of the park, but claimed that, at present, no resources or personnel for proper surveillance.

“Sandy King has not been developed. The idea is to be a biological corridor. We do a check with patrols in vehicles, sometimes with the Armed Forces or Coast Guard. I recently became an evacuation of people in the mouth of the Naranjo River. We could rebuild the house for rangers, which dismantled unknown and the access gate was stolen. Drug activity there can not hide, but still occurs in other mangroves, “said Lamb.

He added that only have eight staff to monitor the park, covering 55,000 hectares. He added that it expects to open next year a beach house for the King surveillance.

Oscar Mario Rodríguez, head of the base of the National Guard (NG) in Quepos, said that besides Rey beach in Parrita and Aguirre are other beaches with extensive mangroves, which are also widely used by drug traffickers.

He recalled that in June they discovered a hole to hide cocaine in Palo Seco. In the same place, but last January, authorities located 948 kilos of cocaine.

For Martin Arias, director of the NGA, these events occur because they are very large and isolated areas, where it can not be reached by land. It is protected mangroves and uninhabited.

The police chief said he hopes to end or beginning of the year the Coast Guard have a radar system in conjunction with cameras that allow them to detect suspicious vessels.

San Jose Could Suffer Water Shortages in the Afternoon