Dow Closes Down 588 After Dropping Over 1,000 Points During Monday

Dow Jones News – In a historic day of turbulence, the stock market whipped between nauseating drops and roaring comebacks on Monday before closing with another big loss. 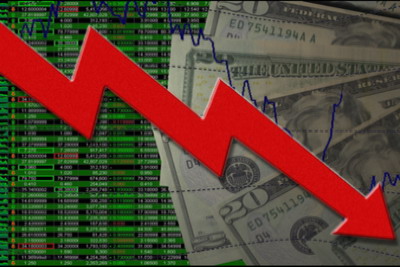 Seized by fears that the Chinese economy is not as healthy as it appeared to be, investors sold with abandon at the opening bell and sent the Dow Jones industrial average down almost 1,100 points, the biggest decline on record in a trading day.

Then the market staged a dramatic comeback and almost erased its losses, coming within about 115 points of break-even. By late afternoon, stocks were sinking again — and the Dow closed down 588 points, or 3.6 percent, at 15,871.

“The movements we’ve seen have been so fast and so large,” Peter Costa, the president of the trading firm Empire Executions, said on CNBC. “You’re talking about 75, 100-point moves in two minutes. It’s been extremely fast, and it’s happened very, very quickly.”

The Vix, a market reading that measures volatility and is known as the “fear index,” hit 53. The last time it was over 50 was in March 2009, when the market hit its bottom after the financial crisis.

Investors around the world are worried about China, the world’s second-largest economic power and a huge market for American products. China devalued its currency two weeks ago and has shown other signs of economic weakness.

The Standard & Poor’s 500 index, a broader reading of the market, ended down 3.9 percent, and the Nasdaq, heavy with technology companies, finished down 3.8 percent.

The drop at the opening bell on the Dow amounted to 6.6 percent, so steep that the New York Stock Exchange invoked a little-known rule to prevent panic selling.

Last week was the worst for the market in four years. The Dow entered what is known as a market correction — a 10 percent decline from its all-time high, reached in May.

In the United States, few stocks were immune — especially not companies that do big business in China. Apple, which closed Friday at $105.76, dipped to $92 at the open on Monday. Yum Brands, which owns KFC, closed at $79.70 on Friday and sank to $71.39 on Monday morning.

“What’s a company that’s doing business with China actually worth right now?” JJ Kinahan, TD Ameritrade’s chief strategist, told The Associated Press. “When you’re not sure, you tend to sell.”

The gap between the Dow’s highest and lowest points of the day was 1,089 points — a bigger swing than on the most volatile day of the 2008 financial crisis and during the 2010 “flash crash.”

Analysts tried to point out that the fundamentals of the American economy had not changed — steady growth, stable banks and an unemployment rate of 5.3 percent. At the last market correction, in April 2011, unemployment was 9.1 percent.

Seeking to calm the public, Josh Earnest, the White House press secretary, focused on the “resiliency” of the U.S. economy. He said the Treasury Department was keeping a close eye on global markets.

“The president is very mindful of how this would be a particularly bad time for a self-inflicted wound,” he said, urging Congress to pass a budget and avoid a government shutdown.

One market-watcher, Jim Paulsen, chief investment strategist and economist for Wells Capital Management, said stocks were primed for a sell-off. The S&P 500 tripled from its low in March 2009 to its record high earlier this year.

“I’ve been of the view since late last year that this market is in a vulnerable position,” Paulsen told the AP. “It’s gone almost straight up for six years.”

Unemployment Numbers in Costa Rica Show Many Looking for Jobs