When I was in junior high school, bored classmates and I would hold breath-holding contests. Since I could hold my breath for 4 minutes, I usually won. Natalia Molchanova, the greatest freediver in history who died last Sunday in a “fun” dive off the coast of Spain, could hold her breath for 9 minutes! 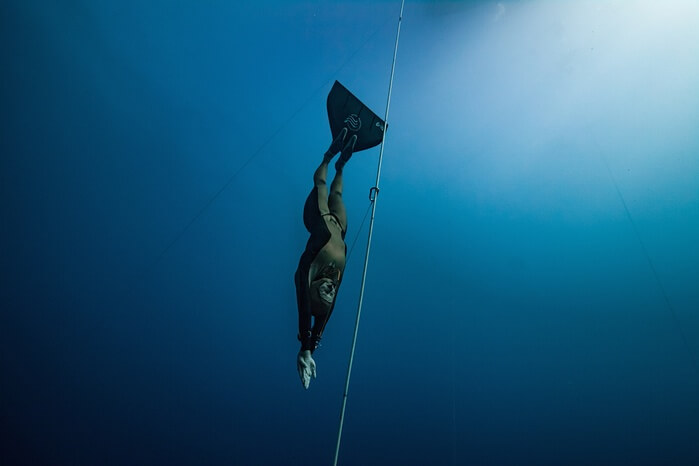 For those who not familiar with the putative sport of freediving, a woman or man slows down their heart rate and awakens the amphibian within through deep breathing, and then plunges as deeply as they can, before ascending along a safety and measuring line. Molchanova’s record without a monofin is 71 meters; with a monofin 100 meters (about 233 feet). She is the only woman to have broken the mythical 100-meter barrier.

Talking about the core appeal of the endeavor, Molchanova sounded like a contemplative describing the state of samadhi: “When we go down, if we don’t think, we understand we are whole…when we think, we are separate.”

Her extraordinary life shows the lengths that people are willing to go to in order to feel whole. The impetus for wholeness is a very strong drive within us. Why then is separateness taken as a given in daily life?

As Molchanova said, “When we think, we are separate.” But as Descartes mistakenly said, “I think, therefore I am.”

There is no separation when there is no thought, because thought is based on separation. In the meditative state, when thought naturally falls silent in undivided attention to its movement, there is no sense of separateness, or for that matter, time.

That’s why the movement of negation in meditation is so important, because it effortlessly ends the movement of thought and time. In that state of peace and ecstasy, one enters the house of death without a trace of fear or morbidity.

Death is as much a part of life as life is. Indeed, more so, since death, beyond the word and all our ideas and fears surrounding it, is the ground of life and all that is.

So life and death go together, inseparably. Only man lives by separating them, clinging to life while avoiding the actuality of death.

We live as though when thought ends one’s life ends because we equate the ending of our lives with the ending of the self, the ‘me.’

The ending of ‘I’ is not the end of life however, but rather the beginning of life and living. We fear the ending of thought because we fear psychological death, not physical death.

We cannot imagine the end of ‘me.’ And since in imagining it we fear it, we equate the continuity of our precious selves with life itself.

Whatever the factuality of reincarnation, the continuity of the separate self ends at physical death. So why not end thought and self during life, and see what death is truly about? We don’t have to wait until we die to know what death is.

Life and death are inextricably related; only man separates them, fearfully clinging to what we call life while refusing to look at the actuality of death.

Many people nowadays try to avoid the challenge of death by speaking of the permanency of “our true inner self.” But there is no such thing. The self 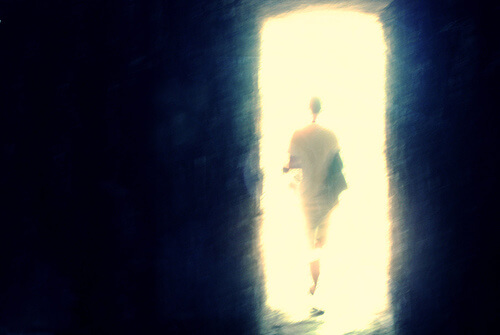 is false all the way down. What’s true within us has nothing to do with self, separateness and thought.

When one finds oneself beyond time and space, which is synonymous with being in communion with the actuality of death as it is happening around and within one every moment, it seems the simplest and easiest thing in the world.

Though it is simple however, it’s by no means easy. Otherwise illumination would be the norm, not the exceedingly rare phenomenon that it is in human beings.

Is living in communion with death enlightenment? As one who regularly enters the house of death through ending thought and self in meditation, I know how difficult it is to effortlessly delve into the origins of separateness within, much less dwell there and function in the world.

Speaking personally, it’s no longer good enough to enter the house of death after diving to the bottom of oneself during an hour’s sitting beside the stream. What ends psychological thought and time irrevocably? Can that actually happen within one?

There is another way to reach the depths within besides plunging into the watery ground of death, the ocean from which all life sprang. Without risking life and limb, it’s not only possible, it’s urgently necessary to regularly experience the ending of thought and thinking, separateness and time.

Costa Rican Held in Nicaragua Has Been Shipped to Mexico