Dialogue With a Buddhist Professor About Evil

A conversation with a Buddhist professor from India turned to Siddhartha’s illumination, the last stage of which was challenged by what we in the West call Satan. “The Buddha,” he said, “was attacked by Mara, but the Buddha came to see that the evil was within him.” 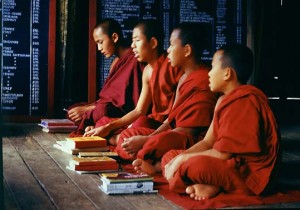 I asked, do you mean to say that evil is only within the individual?

The Buddhist professor was momentarily stumped, but instead of questioning, he tried to have it both ways by saying “there is no duality.”

That’s a clever non-response, I replied, but we’re not talking about duality. You said that the Buddha came to see that evil was within him. Do you feel that evil originates and has its locus solely within the individual?

Buddhist Professor: “Evil doesn’t exist except within us,” he declared.

Do you mind sir, not just giving your opinions, though you are a learned man, but asking the question with me? Though I may have had an insight into the nature of evil, that insight, if valid, has to be rediscovered through inquiry, questioning together, which is the true meaning of dialogue.”

BP: “I agree, but don’t we have the impediment of coming from two completely different cultural traditions?”

That’s only an impediment if we don’t have the spirit of inquiry, and are coming from ego and knowledge, belief and opinion. Inquiry requires humility, especially when into going into an issue as serious as this.

First let’s make sure we are talking about the same actuality, since the word is not the thing.

The good professor seized the thread of the question: “What is evil?”

BP: “Are you saying that there’s a movement of darkness in the individual and in peoples, but that isn’t evil?”

Yes, even the worst, indeed especially the worst people don’t act out of their own content of darkness alone.  Hitler is known as the epitome of evil in the West, but Hitler did not act alone, and was not evil alone, right?

BP: “Yes, however evil a person or people are, they act out of something far deeper in human consciousness. Jung called it the shadow, but it goes far beyond that.”

Yes, obviously. And now, because of commerce and travel and communications, it is one chaotic global society, so the 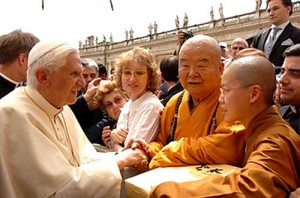 distinctions between East and West, much less between peoples, matters much less, if at all anymore.

Sadly yes, often especially so. Though Buddhism has many contradictions, and Buddhists are by no means exempt from evil, I’ve been struck by rampant evil behind the pedophilia scandal in the Catholic Church. The cover-ups by the bishops and the Vatican were worse than the crimes, as horrific as they were, because those in authority allowed priests committing this evil upon children to be anonymously moved from parish to parish, where they committed more hideous acts on children, often destroying their spirits. The hierarchy of the Catholic Church allowed the evil to grow, and so became besotted with it, to the point that the Church no longer has any moral authority. And they call themselves religious!

But we’re asking a larger question: Can honest and self-knowing individuals protect themselves from evil? Or, because we all have darkness within us, can evil use us at will?

BP: “It’s true that except for a completely illumined person like the Buddha, we all have active darkness within us. But if your distinction is true, evil is a collective thing, and we don’t have to be puppets on its strings.”

That’s right, though some people would say that this distinction, which does not presuppose a duality, absolves the individual of responsibility. In actuality, it makes the individual truly responsible, because then we’re completely responsible for our own souls, if I can use that word, as well as humanity. It turns the Christian falsehood of ‘Christ died on the cross for our sins’ on its head. 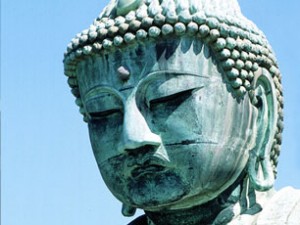 Good is not the opposite of evil, for there is no duality. And evil certainly has nothing to do with God, though theologians in the West, viewing God as a father figure, childishly ask: How can God permit evil to exist?

The Buddhist professor continued the thread of the inquiry:  “So are you saying that the content of dark matter in the individual is comprised of all the unresolved hurts and hatreds within us, built up generation after generation, and passed down by family and karma? And that the totality of it in human consciousness is the collective darkness of humankind, some of which has intentionality, and that is the source and meaning of evil?”

Yes. So what is our response?

BP: “In Buddhism we say that the seeing is the acting. Is there anything else to be done?”

My experience with Buddhists in the West is that they’re in denial about the actuality of evil. Some even say evil doesn’t exist, but nearly all have a sophisticated version of the old American dictum, ‘think positively and everything will work out.’

BP: “Clearly things aren’t working out for humankind. Can we see when an individual is acting out of evil and not react to it?”

That is the question sir! Since we all have darkness within us to one degree or another, reaction is the activation of that darkness. Reaction makes us conduits for evil. And collective darkness flows through the inwardly dead, which are legion in the West now. One may have to respond to attacks, but reaction to conduit activity, however understandable, brings one down to the conduit’s level.

BP: “I have changed my view,” said the professor. “Mara attacked the Buddha; it was not within him. And by not reacting, and meeting it completely, he attained enlightenment.”

Though I’m not a Buddhist that sounds right. Normally, darkness and evil are denied and avoided. But in observing, questioning, and remaining with the darkness within oneself, one is constantly learning. Then when one is attacked and does not react, one turns the tables on evil. That’s very difficult, as I can attest, but if even a small minority of people lived that way, evil would no longer rule the world.

Conduits become impotent without reaction, and the dark matter within us dissolves in the light of insight.

Discount For Having The Best Butt In The Restaurant