Ghosts & the Supernatural – Recently, I was contacted by a trucker named Mindfxck. Well, that is the name he likes to be called. Mindfxck believes a demon is possessing him. A lot of times I get crank calls, but during the interview, Mindfxck gave me a few chills. As a Fortean Investigator, one who investigates all things paranormal, I wanted to know Mindfxck’s story. The interview was conducted via cell phone. 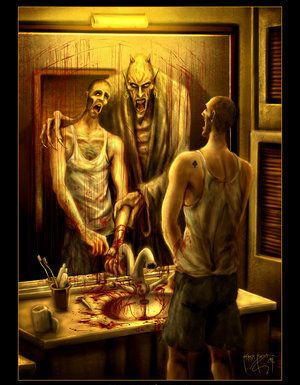 This interview was transcribed via a telephone conversation. The words are to the best of my ability and knowledge on how the interview was conducted.

Mindfxck (M): You that ghost guy?

P: I am the General Manager of Haunted and Paranormal Investigations International. How can I help you?

M: Well, sounds like to me you are the ghost guy.

P: I do all things paranormal, UFOs…

M: I don’t give a rat’s axx about that, do you know anything about demons?

P: If you don’t calm your language, I will simply hang up.

M: I thought you were here to help, you have your gxxdamx phone number in your cockamamie stories.

M: Just call me Mindfxck, I need some serious help, I really do think I have a demon inside of me. I’m sorry for my language, I just been bullsxxted around by everyone, including some lame dxxk priest, don’t know his axx from a hole in the wall!

M: About 3 weeks ago, some demon calling himself I think Shemyoza or Shemyowza came to me in a fxxing nightmare. He told me he is very ancient and is an observer of the human race. He does not condone the primal animalistic ways of some humans. He said if I feel anger, I should express it. Humans should never hold back their anger, it’s a motor response that should not be denied. It should always be released and this world would probably be a better place.

P: Do you think this Shemyoza or whatever you may call him is correct?

M: I have done some axx whippin’ in my lifetime, but sometimes I want to strangle people to death!

P: Really strangle? Are you serious?

P: Mindfxck, you sound like a very angry negative person. You need some serious help. Have you consulted a psychiatrist?

M: F that! I don’t need no damn shrink. I got a demon inside of me and if it takes over, things can get messy! What can you do to help?

M: Ain’t givin’ you my real name, I ain’t stupid, but I will tell you I drive a rig.

P: What is your route?

M: Screw that, can you help me?

P: Have you ever been baptized?

M: I don’t believe in that crap.

P: You believe in this demon, so why don’t you believe that baptism could possibly cleanse your soul?

M: Don’t get all religious with me! 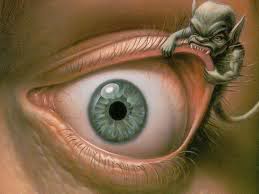 P: Not getting religious, baptisms have a ancient significant importance, it seems to draw a positive force within your being and….

M: You ain’t no damn help, any damn holy roller could of told me that. You might be hearing about me one of these days ghost man!

P: How can I contact you, can I have your phone number? (Mindfxck called on a restricted number).

M: Not giving it to you..got to get down the road…later dude.

After this phone call I was a bit shaken. Mindfxck was either pulling a good prank on me, or he is going through some serious mental issues.

My thoughts on this interview:
The Catholic Church and numerous evangelical Protestant denominations embrace the belief of the existence of demonology and demonic possession. The Catholic Encyclopedia points to how this belief is strongly rooted in church doctrine.

There are many cases in which demonic possession is used to explain psychological conditions that have nothing to do with demonic possession. This applies to cases that involve: personality disorders and people that suffer from bipolar disorder or schizophrenia.

Equalizing cases of mental disorders with cases of demonic possession can be traced back to the 1509 publication of the Malleus Maleficarum by Heinrich Institoris and Jacob Sprenger. There are also links to witchcraft with demonic activity. The Malleus came together the long held distinctions between insanity (from Roman law) to demonic possession.

I truly believe Mindfxck has a serious mental disorder and if he does not seek out the proper assistance to his mental health issue, there could be people that will unfortunately face his unstoppable juggernaut wrath. Sometimes a person with mental issues will think they have a demon possessing them. When they seek out a baptism, they make claims that their soul feels cleansed and pure. They feel the ‘calming effect’. Sort of like a placebo. A placebo is a pill that you are told can help with your mental, physical ailments, but the pill is nothing but a sham. A pill is given to a smoker and he will be told it will help him to stop smoking, but the placebo does nothing out of the ordinary. Because the smoker was told it will help him quit smoking, he believes in this completely and stops smoking. Baptisms given to people with mental disorders who thought they were demonically possessed, felt pure of heart, positive and made claims that god was now in their souls. That is why I suggested baptism.

I hope someone can help Mindfxck, before he finds some hapless chap on a dark road.

Too Connected for Jail? Why Were Charges Should Be Filed Against Hillary Clinton?