Death of an American by Car without Brakes

One American was killed yesterday when the vehicle he was driving had the brakes fail. The vehicle overturned and he was crushed under the car.  The incident occurred at 11 am on a gravel road that goes from Lagunas de Baru Savegre Aguirre Perez Zeledon. The foreigner was identified as Kelley Daniel Leroy, 69. 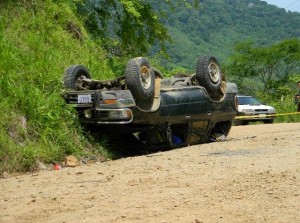 The Judicial Investigation Organization (OIJ) reported that the U.S. was traveling with three other foreigners. OIJ did not release the identities of the passengers.

The driver died at the scene of the accident, while three others were unharmed in the accident.

Gerald Valverde, Transit official who attended the event, said the accident occurred because the brakes failed.

“Apparently, the accident occurred by a  mechanical failure,” said Valverde.

Don Dicker, a friend of the deceased, said the foreigner was retired resident and lived with his wife and seven year old son in a house in Perez Zeledon.

“He (the deceased) was a lover of nature, animals and, especially, fishing.

“Something I always wanted to do was take a quiet life, he found, but he was unable to enjoy it long enough,” said Don Dicker, the aide of U.S..

Only in Costa Rica for Week of June 4th