English Premier League News – Chelsea has announced a profit of £1.4million for the last year – the first time the club has finished in the black in the Roman Abramovich era. 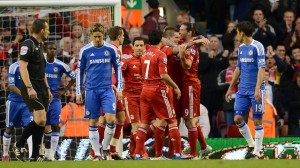 Success in the Champions League plus a profit in the transfer market has seen the club overturn a bleak financial record which saw them return a loss of £67.7m the previous year.

Club chairman Bruce Buck said: “We will never forget that night in Munich and now we are celebrating serious progress off the field too.

“While we draw huge satisfaction from the achievements of the past 12 months we are more than ever focused on continuing the story of on-field success supported by improving financial performance off the pitch.”

The results will be a huge boost to the club’s efforts to comply with UEFA’s new financial fair play regulations, which will oblige clubs in European competition to break even.

A Chelsea statement said: “The £1.4m profit contrasts with a loss of £67.7m in the previous financial year and puts the club in a strong position to comply with UEFA financial fair play criteria for the coming seasons.

“The club also enjoyed an uplift in revenues from commercial activities including new partners and merchandising.”

The statement added that debt of £166.6m was turned into equity during the course of the year “making Chelsea FC plc debt free”.