CR Cops and Skateboarders Come Together to Prevent Crime

Instead of chasing them, disturb them and prevent them from practicing their hobby, the officers of the Armed Forces of Escazú have decided to make peace with the ” skateboarders ” and to organize activities for them to do their stunts on ramps and rails in total tranquility. 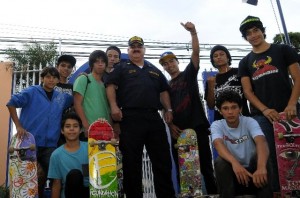 The strategy aims to approach the boys, let them understand and express , while values is to train the citizens and give them the skills to enable them to overcome the temptations of drugs and crime risks.

As part of this project yesterday at 9 am at the park in San Antonio de Escazú will be held the first fellowship Skate -forces Escazú, where pro skaters will be exhibitions and competitions between the boys of Canton and of course, awards.

It is expected the participation of dozens of young people. The idea is that every two months, repeat the activity, which gradually be incorporated into the lectures and discussions by the Police .

Breaking down stigma. Carlos Jimenez, director of the Armed Forces of Escazú, said there is great stigma among citizens about the “skateboarders” for associating them with crime, vandalism and drug trafficking. In fact, the official noted, are “good guys” who want to have fun without disturbing others.

“What they need (the” skateboarders “) is a space where to skate freely and quiet, that’s what we want to give them, “the official said.

For “skateboarders” Escazú, this is a very good first step to gaining territory and have his hobby, said the skater Elvis Orozco, 22.

“This is great, here in Escazú there are plenty of people who skate, but we always kicked out of everywhere, it seems that things will change,” he said.

Concurred with this view Franchesco Saravia, 15, who stressed the importance of respecting the “skateboarders” and urged people to know and understand the hobby, before judging.