Costa Rica Travel – For a certain set of luxury travelers, personality is king. Sure, we love the consistency of the big brands (and companies like Four Seasons and Mandarin Oriental almost always knock it out of the park), but sometimes we crave quirkiness. We want to feel human fingerprints on the places where we slip into bed. We want to feel transported—to a distinctive place, to someone else’s creative vision for bringing beauty to the world. 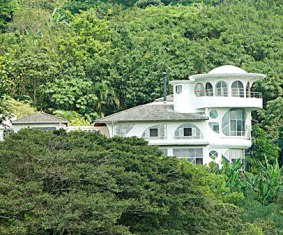 Finca Rosa Blanca is one of those places. Just 20 minutes from the international airport in San José, it’s an ideal first or last stop for a trip to the coast or the cloud forest or the volcanoes, but it’s also a destination in its own right.

The hotel was born some 30 years ago, when American artists Glenn and Teri Jampol fell in love with inland Costa Rica. With Glenn’s mother, they were inspired to build a family home in the highlands. Soon after, bowing to financial realities, they began renting rooms to pay for their Central American investment. What began as a hacienda with eight rooms has grown into a 14-room boutique eco hotel that breaks the mold in the best possible of ways. Glenn still describes it as a giant art project and as a sculpture. (Disclosure: I stayed as a guest of the owners.)

That’s because his paintings are in many of the rooms and public spaces, and he and Teri curated all the art and furnishings throughout the hotel. Each room has personality in spades, with murals on the walls and artwork over the archways. The layout is rambling—you’ll probably get lost at least once on your way to your room—but the wandering brings its own rewards. (Try to stumble upon the saltwater swimming pool, with its soothing waterfall and tropical reflections.)

And in this case, the eco bona fides are real. Finca Rosa Blanca is a member of the well-regarded Cayuga Collection of Central American hotels, which has built its brand on proving that luxurious and green are not incompatible. Glenn Jampol was the president of CANAECO (the National Association of Ecotourism in Costa Rica) for seven years, and frequently consults or speaks in destinations as far-flung as Sri Lanka, Jordan, Bhutan, Australia, Peru, Norway, Colombia and Canada.

When the Jampols learned that the coffee plantation across the street from their hotel was up for sale, they were spurred to take action. Out of concern that the land would be developed, they bought it themselves and set about reinvigorating it as a coffee plantation. Now the 35-acre shade-grown plantation produces some of the finest beans in Costa Rica, and all guests are encouraged to take a coffee tour and do a cupping with a smart, enthusiastic guide. My traveling companion, a San Francisco coffee hound, discovered she could do without milk and sugar here.

But for all the sustainability points that the hotel earns, there’s no sanctimony. The rooms are sexy, all with private verandas, the small spa is indulgent, and the restaurant is outstanding. Newly installed chef Gustavo Alvarado recently moved back to his native Costa Rica after more than 17 years of culinary and management experience at five-star resorts in the U.S. The open-air dining room is lovely, but a meal of tasting places at the chef’s counter in the indoor kitchen is one of those only-here experiences that linger in travelers’ memory long after they check out.

Costa Rica One of the World’s Biggest Fruit Suppliers; EU On the Rise