Costa Rica Entertainment (Michael Miller) – In May of 2014, Costa Rica’s Jade Museum moved from the insurance building in Downtown San José, to a new building five blocks away.  The day that the move took place, two things instantly happened: 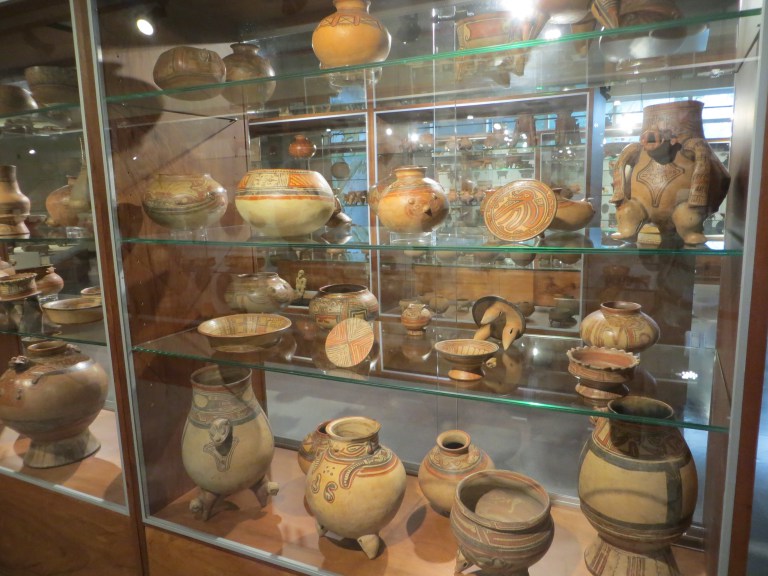 First, the Jade Museum expanded from five crowded rooms in the old building, to five spacious floors (and 75,000 square feet), in a brand new building dedicated totally for the Museum.

Second, the Jade Museum went from being a parochial collection of artifacts, to become a world-class museum.

Once inside, you will see why the building was given such a unique appearance. Its architects shaped it to represent a big block of jade. One of the first things you will see when you enter the building, is . . . . a big block of jade. It has interesting angles and curves, and a rough earth-toned exterior. Then, where the exterior has been cut away, you will see the rich lustrous jade that glistens in different shades of green.When you approach the new Jade Museum, you will see an imposing structure with interesting angles and curves and a rough earth-toned exterior. This look comes from a special Spanish porcelain that covers most of the building. There are no windows except up and down its center on the east and west sides.

You will learn that this big block of jade is not from Costa Rica.  In fact, Costa Rica has no sources of the jade ore.  All of the raw materials for the country’s jade products came from Guatemala and Honduras.

Beginning about 600 years before Christ, raw jade ore, such as this big block on display at the Museum, was brought into Costa Rica over ancient trade routes. Once here, it was worked on by tribal craftsmen, mostly in the coastal areas of Guanacaste on the Pacific side, and near the present-day city of Limon on the Caribbean side.

For over 1,000 years, this jade industry was one of the hallmarks of life among the indigenous tribes of Costa Rica.  And today, the new Jade Museum displays the largest collection of American jade anywhere in the world.

When you enter the first exhibit room on the ground floor, you will see a display of the tremendous variety of objects created from jade.  There are jade necklaces, bracelets, anklets, pendants, religious objects, and figurines carved with images of birds, butterflies, bats, and other animals with which the indigenous people would have been familiar.

As you move through the Museum, you will see much more than jade.  There are thousands of pieces of priceless pottery, ceramics, and tools made from stone and shells, all from the pre-columbian peoples who lived in what is now called Costa Rica.

What is most impressive to me, is that the creators of the new Museum have not just laid out a bunch of artifacts in glass cases.  Rather, they have gone to great lengths to show how these pieces were made, and how they were used in the every day lives of these ancient people.

When you step into the new Jade Museum, you are, in a virtual sense, taking a step back over 2,000 years.

The Museum uses dramatic visual images on glass walls, and even on the floors, to portray how the indigenous people lived, and what they would have encountered. Each section has written descriptions of what you are seeing, both in Spanish and in English.

However, the features that get the most attention, are the life-size dioramas that are found throughout the Museum.  These dioramas, or models, give you a taste of what life was like in Costa Rica’s pre-columbian villages.  You will see men hunting and fishing. You will see a woman grinding corn into meal.  There are people weaving cloth, women feeding children, and even a group preparing a corpse for burial.

The display room that had the greatest impact on me was called “The Night.”  Here, the lights are low, you can hear the sounds of the night birds, and it feels almost as if you have entered the dark mysterious Costa Rican jungle at night.  You learn about the owls and the other nocturnal birds and animals that roam the forest after dark.

Many of these animals are considered to be magic or sacred by the tribes people. They were often regarded by tribal shamans as being messengers from the underworld.  These nocturnal creatures were often the subjects of images carved on jade pendants, or formed with pottery.

“The Night” display room also explores the burial practices of the indigenous people.  One of the dioramas shows a corpse of a man laid into the ground, as his living tribesmen and women prepare him for eternity. His body is adorned with jade pendants and jewelry, the amount depending on his status in the tribe.  Across his body is placed a “metate,” a stone grinding table used for grinding corn and other grains, something that he will need for his journey through the afterlife.

You should not think that life in these Costa Rican villages was all peace and harmony.  These tribal people faced what all mankind has had to endure, in every period of history.  There is a section of the Museum that deals with warfare and the lives of the warriors of the tribes, including some very graphic displays of the brutality of that part of tribal life.

There are many other fascinating sections of this museum.  For example, on the top floor there is a massive collection of all the pieces that the museum curators did not use elsewhere.  As you look at this, row after row of beautiful pottery and jade, and you realize that each of these pieces is between 1,500 to 2,500 years old, you can begin to understand what an extraordinarily valuable collection this is.

If you have children with you, there are all kinds of interactive displays throughout the Museum that will keep them interested.  Some are hands-on “games.”  Some are presentations on computer screens.  But perhaps the most creative is a “sandbox.” Here, children are given archaeologist’s brushes which they use to uncover buried artifacts, and . . . . yes, a human skeleton.

The “jade era” was roughly from 600 BC to 500 AD, just over 1,000 years.  No one quite knows why, but the use of jade for adornments and for religious figurines quickly came to an end. At that time, the attention of the tribal craftsmen turned to gold, a substance that could be collected from the rivers of this region.

By the time the Spanish arrived in the early 1500’s, jade was a forgotten part of the distant past, and gold had taken its place.  Of course, that is why the early explorers named this area the Rich Coast; Costa Rica. 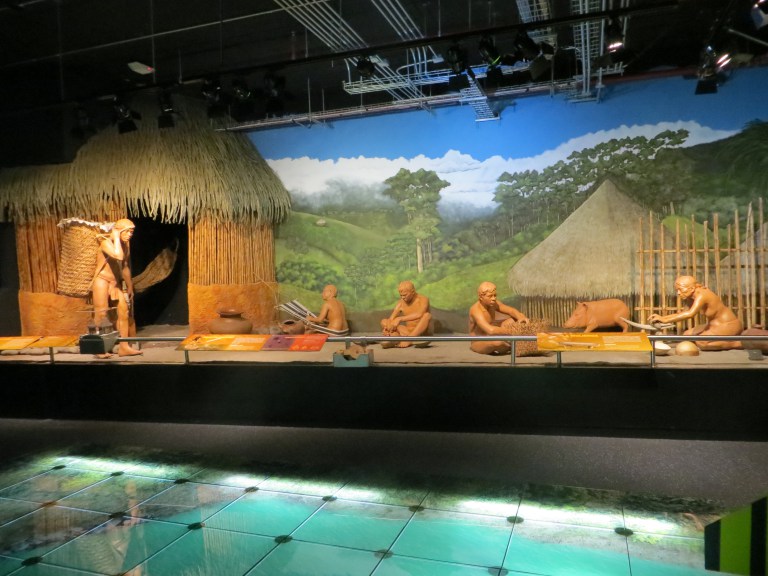 The new Jade Museum focuses on life during that forgotten part of history, in the region that would, centuries later, be called Costa Rica.  And today, here in this very special place in Downtown San José, you can get a small glimpse of life during this ancient time.

The Jade Museum is one of the extraordinary treasures of Costa Rica, and is a “Must See” location for Ticos and for visitors alike.  It is truly a world-class museum.

The new Jade Museum is located on the corner of Avenida Central and Calle 13. That puts it just across the plaza from the National Museum.  The hours are Monday through Sunday, from 10 a.m. to 5 p.m. Closed Christmas Day and New Years Day.

There are audio tapes available to self guide you around the museum.  You should plan to spend at least two hours at the Jade Museum, but quite honestly, you could easily spend all day.

If you are going to be in San Jose in December, the Jade Museum is planning many events for the holiday season, including concerts, plays, and guest speakers.  To learn about those events, call 2521-6610.

I would like to give a warm thank you to Adriana Guzmán, a public relations specialist for the Jade Museum; and to Sergio Garcia an archaeologist for the Museum.  They spent over 2 hours of their very busy day with me, to show me around and to help me appreciate the new Jade Museum.

And finally, a thank you to David Eminente, for his help in introducing me to management of the Museum.  David is the owner of the coffee shop on the ground floor of the Museum, which features wonderful coffee and pastries.  He is also the owner of Sapore Trattoria, a fine Italian restaurant right around the corner from the Museum.

You can see additional stories that Michael has written about Downtown San Joséat his website, by clicking here:  Website The Real San Jose.

Brexit Has Increased the Demand for Costa Rica Property