Costa Rica News – For so many years when you thought Costa Rican women you thought some of the most beautiful in the world and there are beautiful women in the country, but that number seems to be getting lower and lower. 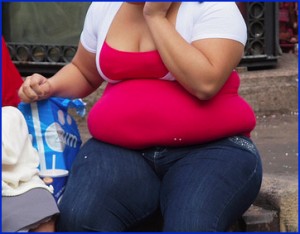 As I mention sometimes Costa Rica is many ways is trying to do everything that the USA does. I guess that applies to obesity levels as well. A lot has been written about the recent report released by the Centers of Disease Control (CDC) in the United States concerning obesity forecasts. By 2030, the report states, 42 percent of Americans could be obese, and 11 percent could be overweight by more than 100 pounds. The forecast was revised downward from 50 percent.

The obesity rates in Costa Rica that are cited by La Caja usually come from studies performed by the World Health Organization (WHO) rather than the OECD. Still, the figures are alarming: the combined percentage of obese and overweight adult Ticos is 62 percent. Thenumber of Ticas that fall into this category is 60 percent, and according to the most recent census in Costa Rica.

Most of this is being caused by the increased number of fast food restaurants that are on almost every corner in Costa Rica.  Combine that with the increased cost of living that is requiring longer work hours and more expensive gym memberships and you get a fatter Costa Rica.

I was alarmed by these numbers and at first did not believe them.  However, I started paying attention as I traveled around Costa Rica and about 6 out of every 10 adult females was flat out fat.  The girls aged about 15 to 23 are usually fairly attractive, but once they hit that 20 to 23 age point they put on what we would call in college the freshman 15. Except in Costa Rica it is more like the freshman 30 to 50.

But I guess they are pretty proud of this or perhaps the Costa Rican men like this as they do not try to to use vertical stripes or loose fitting clothes. They are more than happy to wear tight fitting shirts that look like they grew out of 2 years before and make their boobs look like they are about to pop out.  Combine that with their tight fitting jeans or lycra pants, it is no surprise their muffin tops are squished out and overhang their belt lines.

My goal was to possibly find a single, childless, beautiful, intelligent woman around my age when I came here.  That is next to impossible to find in Costa Rica. I have adjusted my expectations to 1 kid is ok (as long as the ex-tico that impregnated her is not in her life – most cases they are not, they usually roll out during the pregnancy) and currently holds a job.

I know some people cannot help being overweight and it is a part of life, but not 60%.  Just because you have a child does not mean let yourself go.  This goes for guys too.

What Makes You Feel Fear?

Best Time for the Beach in Costa Rica is Now

Genetic and body structure also play a role in this as well and their short statue. The Tica for instance does not seem to put pounds in the buttock area more in the abdominal area. The Nica it goes to the hips and back side.I would say 90% from 18 years on are mostly inactive. Few go to the gym.

They are tethered to their children by age 18 or younger. Their diet consist of rice, bread, coffee with half milk and sugar. Mostly starch. You see them with small bags of deep fried chips, ice cream cones along with candy on a stick. They buy eggs in 30 to a flat each week because that is affordable protein and cholesterol laden calories. Buying 3 liters of coca cola or other sugar drink flavor.

The women here spend most of their time sitting in their house. Then the others go to work from housekeepers to sitting at a desk.Come pay day the Tico’s head for the bar and down half case of beer and paycheck. The others head to Micky D’s .. Once money spent they are force by hunger to revert back to the starchy food diet.

It only getting worst and now diabetes is over taking the population at such a young age along with high cholesterol and blood pressure. It really rare to find attractive Tica/Nica here anymore. so sad what has become of the once physically hard working population.