Best Time for the Beach in Costa Rica is Now

I am excited. This is my favorite time a year to take trips to the beaches of Costa Rica.  When people ask me when the best time to come to Costa Rica is I always say between the first week in February and Easter, but not Semana Santa. 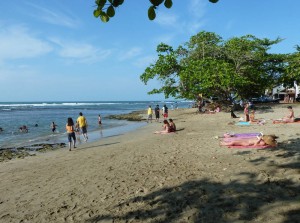 I am a person that does not like to fight the crowds and enjoys a little bit of solitude.  Although it is high season and there are a certain amount of tourists that are travelling throughout Costa Rica, the beach towns and beaches themselves in Costa Rica have a fewer amount of people.

1. It is dry season (summer) in Costa Rica.  You will not have to fight the afternoon rain that starts happening about Mid to Late April.

2. Flights to Costa Rica are not the astronomical prices that airlines decide to charge during the Christmas Holidays until the end of January.  You will start seeing good deals towards the end of January as the crowds travelling starts to die down.

3. The Costa Rican kids are back in School. This is my number 1 reason.  From about December 20th until school is back in session the first week in February the beaches are packed with local Costa Ricans. Most do not leave the country during holidays and instead head to the beach.  I am not into big crowds or being surrounded by people, so having the beaches somewhat secluded is a big plus for me.

4. The beaches are cleaner.  Hate to call the Costa Ricans out but most of the trash and litter on the beaches is from locals not tourists.  I spoke to a Costa Rican one time and asked why they litter so much.  She said that everyone else does so if she does not it does not really matter.  Great common sense!

5. Less Crime. During the holidays more thieves are on the prowl looking for those tourists they know are heading to the beach.  Pickpockets and petty thefts occur a lot more during the holidays.

All of these factors tie into the act that everything is more laid back, safer, cleaner and less congested.  I like laying on the beach listening to the sound of the ocean and not be surrounded by crying children, drunks, and garbage.

Time to pack your bags and enjoy the best time of year in Costa Rica.