Costa Rica News – Flexible, waterproof and ingenuity circuits are some of the features of a one of a kind bra that the emerging startup of tica, Alicia Chong has created to take care of women with heart diseases. 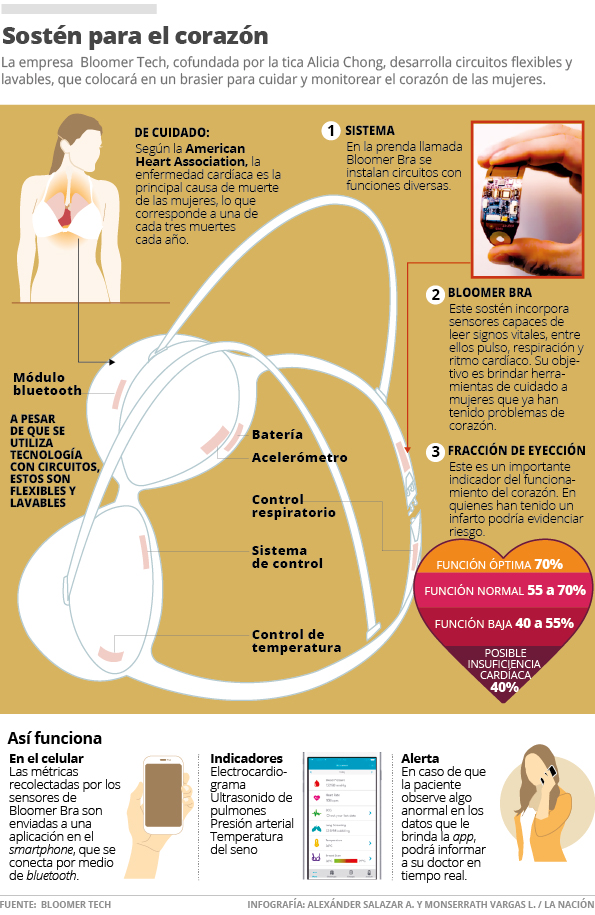 Bloomer Tech, Chong’s company, is developing the prototype of a bra with built-in sensors that can measure such things as blood pressure, pulse and monitor a woman’s respiration.

Students at the university are encouraged to use technologies such as artificial intelligence, nanotechnology, robotics and digital biology, in order to cope with the challenges facing humanity in the next decade. Health is one of them.

Chong, who is an electronics engineer, a graduate of Tecnológico de Monterrey, expressed her concerned about lack of information to understand why since the 1960’s the number of men with heart problems has decrease while the number of women keeps rising. According to the engineer, this is due to the treatment, the procedure of how to diagnose and prevent should differ between women and men, but it is still treated equally.

Recent research published in August of this year by scientists at the University of Leeds in England, argues that this sector of the population is 50% more likely than men to receive a misdiagnosis after facing a cardiac event.

Based on this information, Chong and her team considered using clothing to improve the health of women.

The prototype incorporates equipment that can measure the body’s temperature, monitors the respiratory function, a battery and a Bluetooth module to transmit data in real time to a mobile application. This would facilitate communication between the patient and doctor.

Chong stressed that once a woman is diagnosed with the condition, it is essential to remain constant monitoring to see if the treatment she had receive is efficient.

The garment created by Bloomer Tech is called Bloomer Bra and its earlier versions have been crafted by sowing the circuit onto a conventional bra. However, the people responsible for this creation remained restless and recently obtained funding to work with more appropriate materials. According to the Costa Rican engineer, they may be able to have prototype as early as January.

Alicia is currently pursuing a master’s degree in design and product development with emphasis on medical devices at the Massachusetts Institute of Technology (MIT), and is where she has found people who serve as models, as well as others that helped the development of this smart bra. Some of the MIT students helped her with the development of algorithms using the bra’s application.

Bloomer Tech has begun testing based on patient’s needs, information obtained from large databases.They also approached women with heart problems in Chile, where they plan to test with the device.

Interamericano de Desarrollo bank (IDB) recognized Chong’s company as one that propose major changes and generates large impact in the health industry in the region.