Costa Rica News – In the mountains of Costa Rica, 4,000 feet above sea level, tobacco grower and cigarmaker Philip Wynn is almost done with his tobacco harvest of 2016. The last growing season started in August in an area called Santa Marta de Puriscal, which is up in Costa Rica’s Cordillera Centro mountains. There, Wynn grew 18 hectares of a tobacco he calls Habano 44, a Cuban-seed strain of Corojo. So far, this harvest has proven to be a banner year and Wynn is very pleased with the crop. 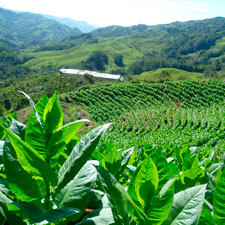 “Climatic conditions for this year are providing for a bumper crop,” Wynn told Cigar Aficionado. “Light rainfall at night mixed with sun and cloud coverage during the day made it ideal for tobacco. We will have a high percentage of wrapper leaf.”

Wynn anticipates that half of his entire crop will be of wrapper-grade quality. He purposely grows during the rainy season, and because of the weather, doesn’t need to irrigate.

“In Santa Marta, we grow during the rainy season, as it rains every day and we do not have to use irrigation,” he explained. “The tobacco is grown on the slopes of the hills so the drainage is excellent.”

By the end of October, Wynn anticipates that he’ll have grown 80,000 pounds of tobacco.

“This year, we planted double from last year. And next year, we will double this year’s crop. Our Habano 44 gives us the best results in the hills of Santa Marta and we produce a high wrapper yield.”

In early January once Costa Rica’s dry season starts, Wynn will start planting tobacco at lower altitudes in Llano Hermoso, which is in the valley. There, he’ll grow Havana 2000 and Pelo de Oro varietals.

Wynn grows under the agricultural company Centauro de Oro with business partner Filippo Guani. Wynn has been making cigars since 1990 but started growing tobacco in Costa Rica in 2014.