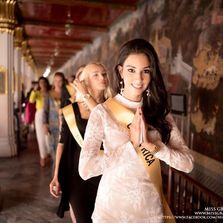 She ended up in the top 10 out of 106 delegates from around the world.

The contest, held in Thailand, is in its third year and is affectionately known as Miss Universe of the East. The winner was from the Dominican Republic and was a clear favorite all along.

Mariela had one of the best figures in the swimsuit contest, which got her to the top 20.

She said in an interview that it was such an honor to represent her country in such a developed competition. Representing Costa Rica in another part of the world has been one of her dreams.

Mariela was sponsored by the national jewelry designer Lucía Echeverría, the dentist Luis Kaver and the boutiques Tiara, Coral and Casa Moda Costa Rica, as well as the Olympic Center gym.