Costa Rica News – When it comes to bullfights, most people come to watch in chance there is some poor soul that gets gored by the bull. the more blood the more fans. Corrida, run, rodeo, and bullfight, are generally accepted as synonyms, though I attest that “bullfight” best describes what actually happens at these events. 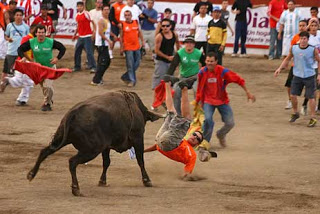 In Costa Rica, its the “crazies,” not the professionals, who throw themselves in front of the bulls. It makes for a greater show but also a ton of human injuries and even deaths! When the ordinary people are able to stay on the bull for a long amount of time they are praised even more than those who kill the bulls. That’s not usually how it ends, though. The emergency rooms set up private entrances for those injured in the fights!

The famous bull of Costa Rica is named “Malacrianza,” or, “Badass.” When asked about the bulls name, a young Costa Rican boy answered that he got that name because “he killed people!” The sport of bullfighting was losing popularity in Costa Rica until Malacrianza killed two people in 2005! This 1,700 pound bull is still going strong at age 13, while others his age are long retired.

People ride in these events just for the fun and the bragging rights. Even if they win, they get only $30. The bragging rights are worth more. Some people choose to run in front of the bull instead of riding on him. Their goal is to distract the animal. I don’t know why anyone would risk their limbs and their lives for this sport. I happened to have had the unfortunate chance to be in the emergency room on a night when a fight was happening.

I want to forget the injuries I saw!