A traffic officer was injured after his motorcycle collided with a vehicle that was parked on the road.  The incident occurred yesterday at 1 pm in front of the intersection of Saret zone, in the sense Alajuela-San José. 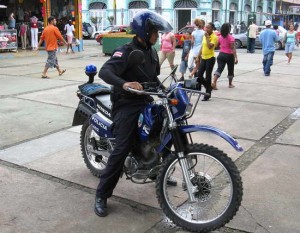 The officer was identified as Edwin Gutierrez, 25, who was taken by the Red Cross to the Hospital in Alajuela in stable condition.

Gutierrez suffered a broken right knee and appeared to also get hit on the right hand.

Diego Herrera, director of the Traffic Police, said the accident occurred when the officer looked in the mirror of her motorcycle at a vehicle traveling without fenders.

“Looking back to the front of the road collided with a car that was parked on the street because it had mechanical problems. The officer was thrown from the motorcycle, which crashed into the parked vehicle, “said Herrera.

In another crash, at about 8 am yesterday, another officer suffered minor injuries by crashing into vehicle sideways.

This happened in front of Rostipollos in Curridabat, San Jose.

The officer involved was identified as Gerardo Diaz.

Apparently, a driver disrespected a stop sign and nearly collided Traffic officer on his motorcycle.

The officer threw the bike to avoid being hit. Diaz did not require medical attention, but the motorcycle itself was totaled.