San Jose, Costa Rica –  The Foreign Ministry will send the request for extradition morning of environmentalist Paul Watson Franklin to the Embassy of Costa Rica in Germany.  The document has be prepared and ready since last Friday. 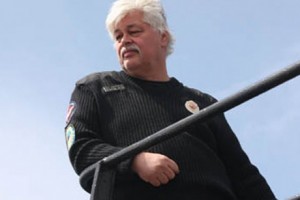 The document includes the danger of shipwreck indictment and extradition document, translated into English, French and German.

Carlos Vargas, legal director of the Foreign Ministry, said the procedure is that of “apostille,” which will be carried out today the Authentication Department with the purpose of sending documents via the diplomatic representation in Germany for this referral to the judicial authorities there.

The captain of the Ocean Warrior was arrested on May 13 at the airport in Frankfurt, Germany, for an international arrest warrant for extradition at the request of the Criminal Court of San Jose.

The environmentalist offered to come to the country to undergo the judicial process and reconcile with the boat fishermen Varadero I, who denounced him in April 2002. However, his lawyer, Federico Morales, raised a procedural defect because Watson never reported in his home in Canada on the date of trial in Costa Rica and, by leave, declared him guilty of being a rebel.

Say Adios to Costa Rica’s reputation as a “pura vida” environmental haven for the world. Talk about shooting yourself in the foot??? This one man is going to totally devastate tourism in Costa Rica.

What is the HIDDEN agenda here?? What can possible be worth to Costa Rica. Other than cuddling up to the Taiwan shark finning enterprise. They are taking the sharks at unsustainable rates they cannot reproduce to any number. President Laura Chinchilla what a sell out and your ministers and diputados. You have enough on your plate with all the corruption and fraud here. Why are you looking for trouble??? Shame on Costa Rica. Tourist you want too come here and visit? go to Hawaii instead.