Costa Rica News – Rainy season in Costa Rica usually starts in late April after Semana Santa.  This year it seems that both Semana Santa and rainy season are coming early for the land of “Pura Vida”. 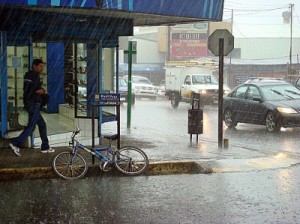 Over the past few days the central valley has been blessed with a couple of afternoon downpours to cool the residents down a bit. It is normal to experience some afternoon showers during dry season but it seems that these were a signal that winter in Costa Rica has come.

The director of the  Instituto Meteorológico Nacional (IMN), says that the start of the rainy season this year will start on  April 1st a few week ahead of the normal.

It will start in the South Pacific and by the third week in April the Central Valley will start getting its daily afternoon showers.

The weather during winter (rainy season) is my favorite weather in Costa Rica.

Costa Rica will have hot sunny mornings and as moisture builds up in the air it is released by the clouds in short, but intense bursts in the afternoons. These rains cool everything down and make the evenings very enjoyable.