Costa Rica News – Well these inspections prove that there is little to no respect for rules in schools in Costa Rica. Also we know that there will be a lot of fuerza public officers that will be getting stones on the confiscated drugs they found in these schools. 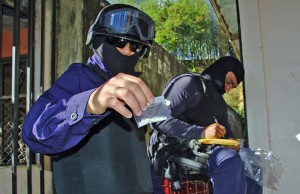 The Labrador sped through each space between desks, sought drug packages. It sniffed lunch boxes and other belongings of the young. It sniffed green areas and corridors, and never sat down.

The drug screening yesterday at a school in San Jose turned up no trace of marijuana, crack, cocaine, heroin or ecstasy students breathe easily as usual.

However, in 2012, in 65% of schools the same percentage as yesterday drugs were detected.

Traces canines are part of the Regional Anti-Drug (PRAD) of the Ministry of Public Security to prevent the use and trafficking of illicit substances in secondary institutions both public and private.

So far this year, officers made 368 surprise appearances in 154 different schools across the country.

In conjunction with the K-9 Unit, the security forces,  five schools are done simultaneously.

Juan José Andrade, director of the Armed Forces, said that the province with more drugs in their schools is San Jose, where young people tend to use them for personal use.

The most common substance in packages, clothing and pockets of students is marijuana: To date, the officers have seized 154 cigarettes and 79 grams of the drug. Most likely there has been alot more than that but it was taken home for fuerza publica personal use.

According to the latest study by the Institute on Alcoholism and Drug Dependence (IAFA), about 9% of school children admit to having used marijuana.

The second in the list of most frequently used drugs in the classroom is crack , with 77 doses confiscated during 2012. Andrade also added they have found cocaine, three guns and 12 knives.

When they detect an illicit substance, officials must decommission and send it immediately to the Forensic Sciences Complex, where it must be destroyed.

But like most things in Costa Rica there are is no accountability so this is not done in all cases.

The iPhone 5 is Approved for Sale in Costa Rica