Costa Rica Sports News – An Ottawa girl will soon get the chance of a lifetime when she tries out for an under-17 soccer team at the international level, but not in Canada. 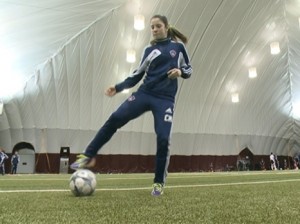 Carmen Marin is from Tamarindo, Costa Rica. She moved to Canada with her family when she was younger.

She’s now in Grade 7 at Fisher Park/Summit Alternative school in Ottawa and trains with the Ottawa Royals’ Futuro Soccer Academy.

Outside of school, Marin’s life is basically dedicated to soccer.

“I practise in my basement. I go online. I look at some tricks to do. I practise my passing against the wall. It’s really the training outside of practice that helps you improve,” she said.

All that practice has paid off, as she caught the eye of the Costa Rica under-17 team officials. The brass there has invited her to try out for the FIFA U-17 Women’s World Cup, which takes place in Costa Rica from March 15 to April 4.

“Ever since I was really little, I’ve always wanted to play on the Costa Rican national team or the Canadian national team. Being a 12-year-old girl and getting that opportunity, it’s just amazing to me,” Marin said.’

Canada’s depth of girl soccer players and Marin’s age have kept officials waiting a little longer in this country. But in Costa Rica, there’s a chance she could make their under-17 team.

If she makes the team, Marin would be the youngest player to ever compete in a FIFA competition.

“For her age, she’s extremely skillful. She has drive. She’s passionate and ready to take on the world at all times,” said Sanjeev Parmar, one of Marin’s soccer academy trainers.