Costa Rica News – Although the chance of this happening to a medical tourist is not very likely it serves as a warning to always do a lot of research before travelling anywhere for general or cosmetic surgery. 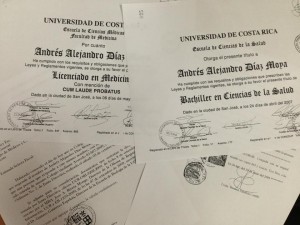 The Office of Tres Rios is trying to follow the trail of a man identified as Andres Diaz Alejandro Moya who has been posing as a doctor. One of his most recent  illegal procedures has caused serious physical harm to young boy.

He charged with the crimes of negligent injury and the illegal practice of a medical professional.

The fake doctor managed actually practice medicine for several months until the College of Physicians and Surgeons were able to detect that the certificate presented by Diaz Moya were forged.

The diplomas were supposedly given by the University of Costa Rica (UCR). The first on April 24, 2007, when supposedly he graduated with a Bachelor of Health Sciences.

The second is dated May 6, 2009 and is in the degree of Bachelor of Medicine.

UCR, however, denies that he ever attended the school of medicine on their campus.  He did get his undergraduate degree in Biology.

Medical tourism in general in Costa Rica is very well monitored and has some of the best doctors in their respective fields. But like everywhere in the world you need to do your research before trusting a doctor or dentist to perform a procedure on you.

The below are ways to try to find out more information before travelling to Costa Rica or another country to have your medical procedures performed.