Costa Rica News – Well for the port towns where the cruise ships arrive they should expect only a slight increase in the number of boats arriving. Costa Rica could receive, during the next cruise season, the same number of ships that arrived in the period 2011-2012 or a few more stated ICT. The new season begins in mid-September and ends in May. 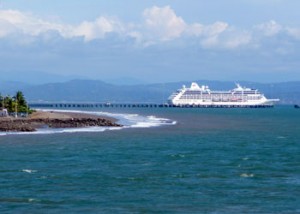 Data was provided by the Costa Rican Tourism Institute (ICT) indicates that during 2011 to 2012, 345 cruise of small, medium and large sizes docked at various ports in the Pacific and the Caribbean, compared with 247 of the 2010-2011 season.

Juan Carlos Borbon, general manager of the company, explained that the expectation of not much increase is mainly because of  moderate fuel costs and the difficult economic situation in Europe.

However, Borbon acknowledged that there is greater regional competition from the Caribbean islands and inland destinations such as Roatan (Honduras), Panama and Cartagena (Colombia) also plays a roll in the estmates.

“The global situation can not predict much, but we hope that the number of arrivals behave similarly to last year. I do not think we will be increasing the number of ships, we are at a critical time, ” said the senior official.

If true, however, in ports such as the historical city of Cartagena, which tourism officials predict an increase of up to 16% in the number of cruise ships that arrive in the 2012-2013 season, according to local media outlet recorded .

This increase is given, among other reasons, is because of  the arrival of new lines and the rise of Colombia as a destination for tourist ships.

Seems that more people are shying away from Costa Rica as a tourist destination.