Costa Rica News – I want to know who in Costa Rica with any sort of brain did not see this coming? I know that most Costa Ricans cannot see the future past tomorrow but how did the Chinchilla regime not see this coming by allowing Justo Orozco to represent Costa Rica at the Human Rights summit in Brazil.  Chinchilla could have easily nominated someone else to go or not allowed Justo Orozco to represent the country, but she of course did not. 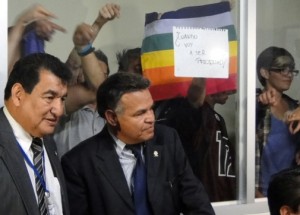 Brazilian activists for sexual diversity have publicly opposed the participation of the deputy, Justo Orozco, at the  Summit on Human Rights and Prisons  in Brazil, to be held later this month.

In a press release issued Monday, the Brazilian Association of Lesbian, Gay, Bisexual and Transgender (ABGLT) expressed their dissatisfaction with the participation of Orozco at the summit and called him a “staunch opponent of gay rights” .

“Just Orozco has made several public statements against homosexuals, which shows the inconsistency to chair the Commission on Human Rights, Justice and Prison Policies, because it violates the principle of universality and indivisibility of human rights and the principle Secular State, ” said a release  signed by the president of the Association, Toni Reis.

The document also criticized Orozco’s opposition against the bill on the  Societies of Coexistence within the Human Rights Commission of the Legislative Assembly.

“Under his presidency, the bill was voted on in record time and was not adopted, by not passing the bill it showed lack of respect for the Constitution and international treaties ratified by Costa Rica,” the statement said.

Orozco, a member Evangelical Costa Rican Renovation Party, denied yesterday that he would chair the meeting to be held in Brasilia on 29 and 30 August and said that this task lies with the legislature liberationist, Oscar Alfaro.

“I’m going as a guest for being the chairman of the committee (of Human Rights in Congress). Since 2010, the directory named Alfaro as a representative of Costa Rica. I’ll just become a member and will not raise the issue of homosexuality, but will focus on the issue of femicide and other prison policies, “said Orozco.

However, in statements given last week to DNA 90.7 FM, Orozco gave a different version and said that “with our heads held high represent my country. preside with dignity, joy and good character. ”

Orozco also defended his beliefs, said he felt “happy and able” to take charge of the Human Rights Committee in Congress.

“I preach by example,” he said. What a Load of Horseshit!

“Sometimes we want to call ‘conservative’ and ‘traditionalists’, but as for good … The good things, like being close to God, we must take care, should last forever,” the deputy.

You should do a real investigation into this guys affairs – personal and business.. I am sure that there is some corruption and/or skeleton somewhere…

Costarricense here all know now it is a fact Lady Laura is a failure. She has no clue and is getting advice by her staff and her decisions . This guy Justo Orozco should have been thoroughly investigated before appointing him. However, I believe it was just and excuse for a nice vacation all expense trip and consultant fee’s on the Tico’s colon. Probably pay back for something else. In other words a scam!