Costa Rica News – The PLN Deputy Jorge Angulo, who still remains in office, asked  Judge Carlos Chinchilla to dismiss one of the four charges of influence peddling that weigh against him.  The jokes keep rolling in when it comes to this group in charge in Costa Rica. Karina Bolanos who made an inappropriate video gets fired over night for making a bad decision but did not do anything corrupt. Jorge Angulo, who is pretty much saying 3 of the 4 charges against him are founded stays in office.  Come on Chinchilla! How much more BS do you plan on having happen during your presidency filled with one corrupt item after another? 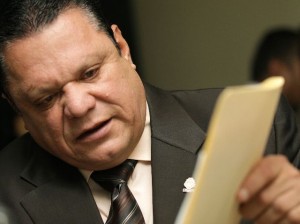 The Congressman is accused of having influenced administrative and financial decisions of the Board of Integral Development of the Southern Zone (Judesur) and using his position to seek economic benefits.

The legislature last appeared before the judge who must decide whether to open a criminal trial for the eight (four on influence peddling, three of extortion and one of embezzlement) by those who accused the prosecution.

The legislature faces the same charges but accused by the Attorney General’s Office.

Angulo represents the National Liberation Party in the province of Puntarenas and is currently facing these charges without immunity.

Chinchilla said the magistrate must now assess Angulo’s evidence to decide if they will delete one of the charges for which the Attorney General Jorge Chavarria accused the congressman.

The case is stuck in the Third Division, pending the Attorney General’s Office to publicize the amount the State will ask for compensation for the actions of the deputy Angulo.

So while the Costa Rican uneffective and inefficient legal system takes its time this corrupt deputy remains in office and i able to use his position to steal more money.  Way to go Chinchilla administration way to take control! Oh wait you are over auctioning off Costa Rica to China.

Do you think lady Laura was jealous that Karina has a lover? Corruption, thievery, Lying; I guess as observer is okay. But a tame video of Karina stating to her lover come and get it not? go figure. I suspect Karina will sue over the dismissal. A shame ..