Costa Rica Cracking Down on Drivers Disobeying the Law

Costa Rica News – For all of us that live in Costa Rica or have driven through the country, you seem to see idiots on the road that are blatantly disobeying the law. Driving in bus lanes, driving on the shoulder of the road, cutting people off after passing illegally, and much more. 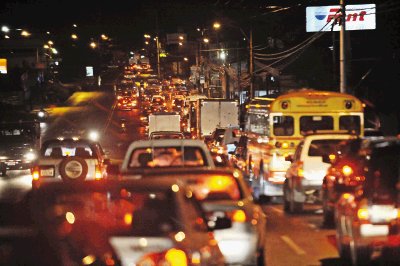 Traffic Police on Tuesday gave out fines against drivers who were using the bus lane on the General Cañas Highway, which leads to Alajuela.

Operating only until noon, the traffic police officers ticketed 30 drivers, and each received a fine of about ¢ 52,000 which is just around $100.

The exclusive bus lane have been in place since 2011, but in recent years the law was never enforced due to lack of traffic officers.

Trying to enforce this law was just one of the actions announced Monday by the Ministry of Public Works and Transport (MOPT), to try to reduce traffic congestion experienced in the San Jose area.

The MOPT also promised to be more strict with compliance to vehicle restriction on certain license plates on certain days and regulation of high traffic intersections.

To try to enforce these laws, the Transit Authority is using the Special Operations Group (GOE) to control the bus lanes and ticket those entering San Jose on restriction.

Usually, the GOE are responsible for vehicle speed control, alcohol and to protect the roads during events like cycling or marathons.

On Monday 298 people were ticketed for abusing the vehicle restriction law and another 173 on Tuesday.

This is all we can hope for, actual enforcement of the driving laws in Costa Rica, but if this is just a one time thing do not expect much to change. If they are going to continue this it might make a difference.