Costa Rica News – Although an accident the Costa Rica Coast Guard captured a fishing boat on which they found 15 kilos of shark fins and a weight of 1,500 kilos of sailfish. That’s right Costa Rica’s shark fin ban is producing huge results……a whopping 33 pounds of shark fins. The problem is solved. (By the way that was complete sarcasm) 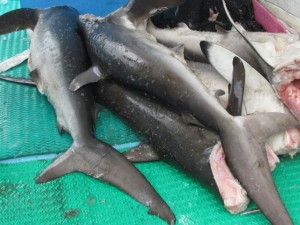 The seizure came in the bay of Quepos, exposed the lack of controls to prevent over fishing of billfish.

According to Guido Abraca, COO of the National Coast Guard, a group of officers were conducting an operation near Quepos when they found a boat near the bay.

On inspection it was found that he had a bag with shark fins. “After taking the boat to port in the presence of the prosecutor they found a total of 15 kilos of shark fin and a weight of sailfish on approximately 1,500 kilos, which exceeds 15% of the total weight of the vessel which is the max allowed by law.

Abarca said these findings are not common because the Coast Guard do not inspect catches that are made in the port of Quepos, because this work is done by the inspectors of the Costa Rican Fisheries Institute (Incopesca).

Odalier Quirós, said in the port of Quepos, Incopesca insepctions are supervised by an inspector.

“What happens is that if there is something illegal in a shipment, the fishermen always seek how to evade controls. For example, evade doing the work in the early morning or late at night, so when we arrived everything is in order, “said the official.

According to Quirós the Coast Guard has other priorities when conducting inspections at sea.

So this bust was by luck and it shows that the check points and enforcement of shark finning and over fishing the Costa Rica waters is just smoke and mirrors by the Costa Rican government.  Nothing has changed since the signing of the bill by Chinchilla banning shark finning.