Costa Rica News – Costa Rica’s president said on Wednesday that China will become Latin America’s biggest trading partner by 2030, as the country is eager to enhance its business ties with the region through diversified investment and trading activities. 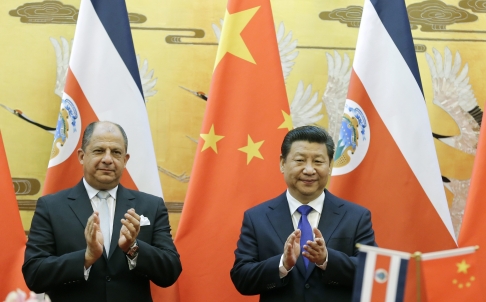 President Luis Guillermo Solis said investments made by companies from the United States have focused heavily on Latin America’s energy sector, and that such a business model cannot develop the economies of members of the Community of Latin American and Caribbean States in a sustainable way.

“Chinese investment has entered more sectors, such as infrastructure, agriculture, digital television, mobile technology and clean energy in Latin America, which will help us to produce more high-value-added products and diversify sales channels in the global market,” Solis said at the annual meeting of the China-Latin America Business Council held in Beijing.

Alexander Mora, Costa Rican minister of foreign trade, said his country’s government will work closely with the governments of the Community of Latin American and Caribbean States to further cut tariffs and eliminate anti-dumping measures against Chinese products, as well as simplify the visa procedure for Chinese business executives to facilitate investment activities in Latin America.

Trade volume between China and Latin America amounted to $242 billion from last January to November, while nonfinancial investment reached $12.4 billion. China has become the region’s second-largest business partner after the US.

Jiang Zengwei, president of the China Council for the Promotion of International Trade, said the two sides are looking at closer collaboration, beyond traditional areas of politics and trade, that extends into finance and investment.

Latin America has evolved into an important destination for the large outflow Chinese capital investment.

“China’s investment and technologies come to Costa Rica, and to Latin American countries generally, at a critical juncture, as the region has seen fewer investors because of the global financial crisis in recent years,” Jiang said.

What is The Current State of the Costa Rica Real Estate Market?